Raggedy Ann’s Trip on the River

RAGGEDY ANN’S TRIP ON THE RIVER

When Marcella had a tea party out in the orchard, of course all of the dolls were invited. Raggedy Ann, the tin soldier, the Indian doll and all the others—even the four little penny dolls in the spool box. After a lovely tea party with ginger cookies and milk, of course the dolls were very sleepy, at least Marcella thought so, so she took all except Raggedy Ann into the house and put them to bed for the afternoon nap. Then Marcella told Raggedy Ann to stay there and watch the things.

As there was nothing else to do, Raggedy Ann waited for Marcella to return. And as she watched the little ants eating cookie crumbs Marcella had thrown to them, she heard all of a sudden the patter of puppy feet behind her. It was Fido.

The puppy dog ran up to Raggedy Ann and twisted his head about as he looked at her. Then he put his front feet out and barked in Raggedy Ann’s face. Raggedy Ann tried to look very stern, but she could not hide the broad smile painted on her face.

“Oh, you want to play, do you?” the puppy dog barked, as he jumped at Raggedy Ann and then jumped back again. 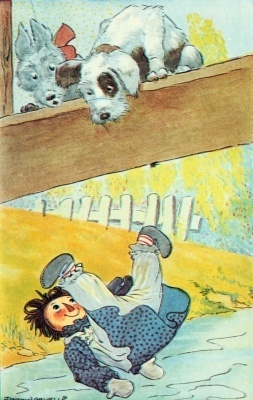 The more Raggedy Ann smiled, the livelier Fido’s antics [Pg 49]became, until finally he caught the end of her dress and dragged her about.

This was great fun for the puppy dog, but Raggedy Ann did not enjoy it. She kicked and twisted as much as she could, but the puppy dog thought Raggedy was playing.

He ran out the garden gate and down the path across the meadow, every once in a while stopping and pretending he was very angry. When he pretended this, Fido would give Raggedy Ann a great shaking, making her yarn head hit the ground “ratty-tat-tat.” Then he would give his head a toss and send Raggedy Ann high in the air where she would turn over two or three times before she reached the ground.

By this time, she had lost her apron and now some of her yarn hair was coming loose.

As Fido neared the brook, another puppy dog came running across the foot-bridge to meet him. “What have you there, Fido?” said the new puppy dog as he bounced up to Raggedy Ann.

“This is Raggedy Ann,” answered Fido. “She and I are having a lovely time playing.”

You see, Fido really thought Raggedy enjoyed being tossed around and whirled high up in the air. But of course she didn’t. However, the game didn’t last much longer. As Raggedy Ann hit the ground the new puppy dog caught her dress and ran with her across the bridge, Fido barking close behind him.

In the center of the bridge, Fido caught up with the new puppy dog and they had a lively tug-of-war with Raggedy Ann stretched between then. As they pulled and tugged and flopped Raggedy Ann about, somehow she fell over the side of the bridge into the water.

The puppy dogs were surprised, and Fido was very sorry indeed, for he remembered how good Raggedy Ann had been to him and how she had rescued him from the dog-pound. But the current carried Raggedy Ann right along and all Fido could do was to run along the bank and bark.[Pg 50] 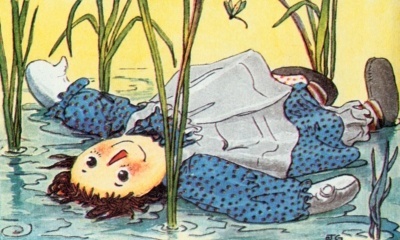 Now, you would have thought Raggedy Ann would sink, but no, she floated nicely, for she was stuffed with clean white cotton and the water didn’t soak through very quickly.

After a while, the strange puppy and Fido grew tired of running along the bank and the strange puppy scampered home over the meadow, with his tail carried gaily over his back as if he had nothing to be ashamed of. But Fido walked home very sorry indeed. His little heart was broken to think that he had caused Raggedy Ann to be drowned.

But Raggedy Ann didn’t drown—not a bit of it. In fact, she even went to sleep on the brook, for the motion of the current was very soothing as it carried her along—just like being rocked by Marcella.

So, sleeping peacefully, Raggedy Ann drifted along with the current until she came to a pool where she lodged against a large stone. 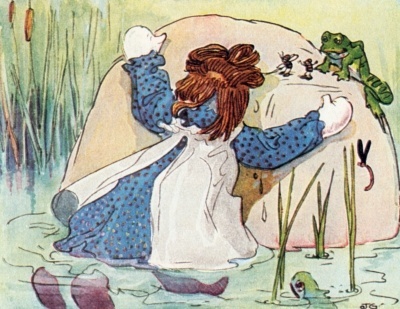 Raggedy Ann tried to climb upon the stone, but by this time the water had thoroughly soaked through Raggedy Ann’s nice, clean, white cotton stuffing and she was so heavy she could not climb.[Pg 52]

So there she had to stay until Marcella and Daddy came along and found her.

You see, they had been looking for her. They had found pieces of her apron all along the path and across the meadow where Fido and the strange puppy dog had shaken them from Raggedy Ann. So they followed the brook until they found her.

When Daddy fished Raggedy Ann from the water, Marcella hugged her so tightly to her breast the water ran from Raggedy Ann and dripped all over Marcella’s apron. But Marcella was so glad to find Raggedy Ann again she didn’t mind it a bit. She just hurried home and took off all of Raggedy Ann’s wet clothes and placed her on a little red chair in front of the oven door, and then brought all of the other dolls in and read a fairy tale to them while Raggedy Ann steamed and dried.

When Raggedy Ann was thoroughly dry, Mamma said she thought the cake must be finished and she took from the oven a lovely chocolate cake and gave Marcella a large piece to have another tea party with.

That night when all the house was asleep, Raggedy Ann raised up in bed and said to the dolls who were still awake, “I am so happy I do not feel a bit sleepy. Do you know, I believe the water soaked me so thoroughly my candy heart must have melted and filled my whole body, and I do not feel the least bit angry with Fido for playing with me so roughly!”

So all the other dolls were happy, too, for happiness is very easy to catch when we love one another and are sweet all through. 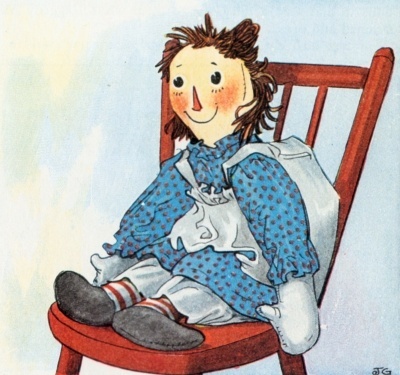 Please rate this story from 1 to 10 stars. 10 stars means you really liked it!
Rating: 8.46/10. From 57 votes.
Please wait...
- Total nr. of readings: 2,917 Copyright © The author [2020] All Rights Reserved. This story may not be reproduced without the express written permission of the author except for personal use.
Share? Thanks!

View from a Zoo

VIDEO: Thea is a house-cat that seems to have it all... she has a warm home, plenty of food and a family that loves her. But something is missing in Thea's life. Where is the excitement?

A boy gets the idea to try and make one of his dreams come true.

The Search for Sir Squeezums

Jonathon goes on a wonderful and imaginative journey with her sister Emily to retrieve her teddy, Sir Squeezums.

A poem about a bird who makes good use of a stray wool hat.

‘Find it!’ Grandpa tells Joel. But what treasure did Grandpa hide in his house, and can Joel find it in a race against the excavator?

A young boy discovers the true meaning of Christmas after a snowflake leads him on a magical journey.

3 thoughts on “Raggedy Ann’s Trip on the River”