The long-haired grey cat pressed his nose against the chain-link fence. The aroma of roast beef and gravy came from a brick building surrounded by oak trees. The food smells reminded him of the fancy cat food he used to eat—Liver and Gizzard Fixings, Turkey Primavera in Special Sauce, and Seafood Pâté with Garden Greens. That was before he lost his humans at a rest stop on the Pennsylvania Turnpike. Since then, he had eaten mainly cold French fries, partly gnawed chicken wings, and other leftovers scavenged from restaurant parking lots and tipped over garbage cans. He’d slept in blackberry thickets and brush piles, under abandoned houses or wrecked cars.

Grey cat scrambled over the fence and landed with a soft flump on the other side. He had just started for the roast beef smells when a black and white cat burst out from under a barberry hedge. Grey Cat crouched low and growled. The fur on the back of his neck stood up and his tail puffed up like a giant sausage.

The black and white cat wasn’t looking for a fight. When only a couple of whisker lengths away, he skidded to a stop. “Prrrttt?” he asked, “Prrrttt-Prrrttt?”

“Hungry?” asked the black and white cat, whose name was Periwinkle.

The other cat nodded and licked his lips.

He followed Periwinkle across the yard to a pet door that led into a large room with soft chairs and couches. A huge ceramic bowl, overflowing with chicken-flavoured kibbles, sat in the corner. Grey Cat sprinted over and plunged his head into the bowl.

“Not exactly roast beef,” he thought, “but better than dumpster food.”

When finished, he looked at Periwinkle. “Where am I—what is this place?”

“This is Oak Grove Senior Living.” Periwinkle scratched under his chin with his hind paw. “Old people live here. And we take care of them.”

“You what?” He began to wash his face.

“We sit on laps and purr, rub against ankles, play and act cute.”

“Sounds like a soft job to me.” He thought about his days on the road, not knowing where his next meal was coming from.

Periwinkle introduced Grey Cat to Blueberry, a Maine Coon cat, and Uncle Bob, who was 16 years old and had spent his entire life in a barn owned by Quakers. They went into the rec room to meet Gabriella who was sleeping under a couch. Gabriella had orange fur, with dark stripes on her right arm and both cheeks.

Periwinkle explained that Gabriella was pregnant. “Soon she’ll give birth,” he said. “Won’t that be exciting?”

“Oh, come on,” said Periwinkle. He whacked his tail against the linoleum. “Everybody loves kittens.”

The residents at Oak Grove Senior Living liked Grey Cat. They decided he should stay and join the cat family.

Mrs Larsen, one of the volunteers, strode into the rec room. Most of the residents were reading or playing cards, and a few were watching television.

“Has anyone seen Gabriella?”

Mr Bouchard looked up from his magazine. “She was here last night.” He tossed the magazine on the table. “Maybe she jumped the fence and took off.”

“I hope not,” Mrs Larsen said. “She could have her kittens anytime.” She pointed at the window. “There’s a big storm coming. She needs to be inside where it’s safe.”

“Oh, really,” she said, “And what do you know about giving birth?”

Several days earlier, Mrs Larsen set up a cardboard box for Gabriella in the laundry room. She lined it with clean towels and placed a litter box and saucer of water nearby.

“There you are, young lady,” she said to Gabriella. “A private place to bring your family into the world.”

It was well past midnight and Grey Cat had just filled up on liver-flavoured kibbles when Uncle Bob walked into the front hall.

“Friends,” he said in a loud voice, “I have an important announcement.”

Periwinkle ran out of the rec room. “What is it?”

Uncle Bob sat up straight and thrust his chest forward. “Friend Winkle,” he said, “We are blessed with new arrivals. Friend Ella has just given birth.”

“She and her progeny are in the utility closet.”

Periwinkle and Grey Cat followed Uncle Bob down the hall. The utility closet was cluttered with mops, brooms, broken walkers, and broken wheelchairs. In one corner, on a pile of old rugs and towels, lay Gabriella. Her eyes were closed. The tip of her tail flicked back and forth. Three kittens were lined up along her belly. They were nursing, kneading her fur with tiny paws.

“Oh my,” said Periwinkle. He sat back on his haunches and blinked. “My, oh my.”

Three of the kittens looked just like their mother. The fourth was black with patches of brown fur.

“They are our gifts,” said Uncle Bob.

Grey Cat eased into the rec room and hopped on the windowsill. It had been raining since midnight. Thick drops pummeled the window, thunder cracked, and lightning sizzled across the sky. Oak branches whipped back and forth; dried leaves spiralled around and around in tight circles. He pressed his nose against the glass. He’d been outside on nights like this, cold, hungry, and frightened. But that was before coming to Oak Grove Senior Living. He wondered, will those kittens always live here, where it’s warm and dry and the kibble bowl always full?

He jumped off the windowsill and pad-padded back to the utility room. He wanted to have another look at the kittens. And sit with them for a while. 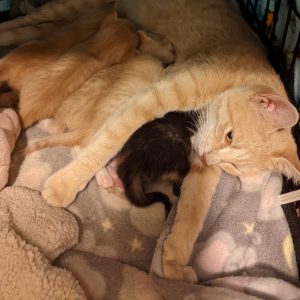 Please rate this story from 1 to 10 stars. 10 stars means you really liked it!
Rating: 9.57/10. From 7 votes.
Please wait...
- Total nr. of readings: 280 Copyright © The author [2020] All Rights Reserved. This story may not be reproduced without the express written permission of the author except for personal use.
Share? Thanks!

Lions are everywhere, all over the town, but why can't the grown-ups see them?

The Story of King Frost

A bad-tempered woman sends her step-daughter out into the cold to freeze, but when she returns with treasures from King Frost, she sends her other daughter expecting the same. A lesson on the fruits of greed, but be warned, it's not a happy ending!

A mysterious alligator stops by to participate in the annual Belvar Bowling Championship.

Keep out of Trouble

13 year old Joe's decision to shelter from the rain leads to unfortunate events.

A story about remembering three eggs hatching in a robin's nest up a tree in the back yard.