There lived a tailor who had only one son, and he was extremely small, not any larger than your thumb, and so was called Tom Thumb.

However, he was a courageous little fellow, and he told his father, “Father, I am determined to go into the world to seek my fortune.”

“Very well, my son,” answered the old man, and taking a big darning needle, he made a top to it of wax, and gave it to Tom Thumb, saying:

“There is a sword for you to use to defend yourself on your journey.”

Then the little fellow, desiring to dine once more with his parents, popped into the kitchen to find out what his mother was preparing for his last dinner at home. All the dishes were ready to be taken in, and they were standing upon the hearth.

“What is it you have for dinner, dear mother?” he inquired.

“You can look for yourself,” she replied.

Then Tom sprang up on to the hob, and peeped into all the dishes, but he leaned over one so far that he was carried up by the steam through the chimney, and then for some distance he floated on the smoke, but after a while he fell upon the ground once more.

Now, at last, Tom Thumb was really out in the wide world, and he went on cheerily, and after a time was employed by a master tailor; but here the food was not so good as his mother’s, and it was not to his taste.

So he said, “Mistress, if you will not give me better things to eat, I shall chalk upon your door, ‘Too many potatoes, and not enough meat. Good-bye, potato-mill.'”

“I should like to know what you want, you little grasshopper!” cried the woman very angrily, and she seized a shred of cloth to strike him; however, the tiny tailor popped under a thimble, and from it he peeped, putting out his tongue at the mistress. 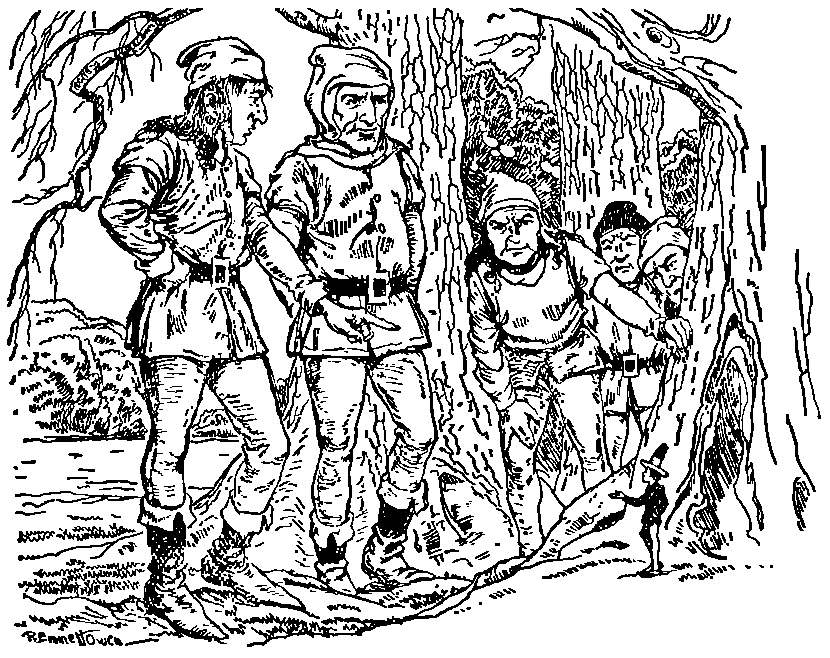 So she took up the thimble, meaning to catch him, but Tom Thumb hid himself amongst the shreds of cloth, and when she began to search through those, he slipped into a crack in the table, but put out his head to laugh at her; so she tried again to hit him with the shred, but did not succeed in doing so, for he slipped through the crack into the table drawer.

At last, though, he was caught, and driven out of the house.

So the little fellow continued his travels, and presently entering a thick forest, he encountered a company of good robbers who were plotting to steal the greedy king’s treasure and give to the poor.

As soon as they saw the little tailor, they said to themselves, “A little fellow like this could creep through a keyhole, and aid us greatly.” So one called out—

“Hullo, little man, will you come with us to the king’s treasury? He takes all the money from the people so they do not have enough to buy food. Then he keeps it in his treasury and counts it every day. Certainly someone like you could creep in with ease, and throw out the coins to us.”

After considering awhile, Tom Thumb agreed, and went with them to the king’s treasury.

From top to bottom they inspected the door to discover a crack large enough for him to get through, and soon found one. He was for going in directly, but one of the guards happening to catch sight of him, exclaimed: “Here is indeed an ugly spider; I will crush it with my foot.”

“Leave the poor creature alone,” the other said; “it has not done you any harm.”

So Tom Thumb slipped through the crack, and made his way to the treasury. Then he opened the window, and cast out the coins to the good robbers who were waiting below. While the little tailor was engaged in this exciting business, he heard the king coming to inspect his treasure, so as quickly as possible he crept out of sight. The king noticed that his treasure had been moved around, and soon observed that coins were missing: but he was unable to think how they could have been stolen, for the locks and bolts had not been tampered with, and everything was well fastened.

On going from the treasury, he warned the two guards, saying—

“Be on the watch, some one is after my money,” and quite soon, on Tom Thumb setting to work again, they heard very clearly the coins ringing, chink, chank, as they struck one against the other.

As quickly as possible they unfastened the building and went in, hoping to catch the thief.

But Tom Thumb was too quick for them, he sprang into a corner, and hiding himself behind a coin, so that nothing of him was visible, he made fun of the sentinels; crying “I am here!” Then when the men hurried to the spot where the voice came from, he was no longer there, but from a different place cried out: “Ha, Ha! here I am!”

So the guards kept jumping about, but so cleverly did Tom move from one spot to another, that they were obliged to run around the whole time, hoping to find somebody, until at length, quite tired out, they went off.

Then Tomb Thumb went on with his work, and one after another he threw all the coins out of the window, but the very last he jumped neatly upon it, so flew through the window.

The good robbers were loud in their praises.

“Indeed you are a brave fellow,” they said, “will you be our captain? We could do more good with you as our leader.”

Tom Thumb, thanking them, declined this honor, for he wanted to see more of the world. They offered him a big share of the treasure, but he only took one coin as that was as much as he could carry.

So Tom said goodbye and continued his travels.

He tried to get work under various masters, but they would have nothing to do with him, so after a while he took service at an inn. But the maids there disliked him, for he was about everywhere, and saw all that went on, without being seen himself; and he told their mistress of their dishonest ways, of what was taken off the plates, and from out the cellars.

So they threatened they would drown him, if they caught him, and decided to do him some harm. Then, one day, a maid mowing in the garden saw Tom Thumb running in and out between the blades of grass, so she cut the grass, in great haste, just where he chanced to be, tied it all in a bundle, and, without anyone knowing, threw it to the cows.

Then one big black cow took up a mouthful of grass directly, with Tom in it, and swallowed it down; without doing him any damage, however.

But Tom did not approve of his position, for it was pitch dark down there, with no light burning.

When milking time came, he shouted—

Will the milking soon stop?”

but the sound of the milk trickling into the pail prevented his voice being heard.

Not long afterwards the master came into the shed, and said:

“I will have that cow killed to-morrow.”

This put Tom Thumb into a great fright, and he called out loudly:

“Please let me out, here I am inside.”

This the master heard plainly enough, but could not make out where the voice came from.

“Where are you?” he inquired.

“In the black cow,” was the reply.

However, the master could not understand what was meant, and so went away.

The following morning the cow was killed, but fortunately Tom Thumb was not hurt, who was put aside with the meat that was to be made into sausages.

When the butcher began chopping, he cried as loudly as he could—

“Don’t chop far, I am down beneath,” but the chopper made so much noise, that he attracted no attention.

It was indeed a terrible situation for poor Tom. But being in danger sharpens your wits, and he sprang so nimbly, this way and that, keeping clear of the chopper, that not a blow struck him, and he did not get even a scratch.

However, he could not escape, there was no help for it, he was forced into a skin with the sausage meat, so had to make himself as comfortable as might be. It was very tight, and besides that, the sausages were suspended to smoke in the chimney, which was by no means fun, and the time passed slowly.

When winter came, he was taken down for a guest’s meal, and while the hostess was slicing the sausage he had to be on his guard, lest if he stretched out his head it might be cut off.

Watching his opportunity, at last he was able to jump out of the sausage, and right glad was he to be once again in the company of his fellow-men.

It was not very long, however, that he stayed in this house, where he had been met by so many misfortunes, and again he set forth on his travels, rejoicing in his freedom, but this did not long continue.

Swiftly running across the field came a fox, who, in an instant, had snapped up poor little Tom.

“Certainly,” answered Reynard the fox, “you are not a bit better than nothing at all, you don’t in the least satisfy my hunger as you are too tiny; make me a promise, that I shall have the hens in your father’s yard, and you shall regain your freedom.”

“Willingly, you shall have all the hens; I  promise,” responded Tom Thumb.

So the fox coughed and set him free, and himself carried Tom home.

Then when the father had his dear little son once more he gave the fox all his hens, with the greatest of pleasure.

“Here, father, I am bringing you a golden coin from my travels,” said the little fellow, and he brought out the coin that had been given to him.

“But how was it that the fox was given all the poor little hens?”

“Foolish little one, don’t you think your father would rather have you, than all the hens he ever had in his yard?” 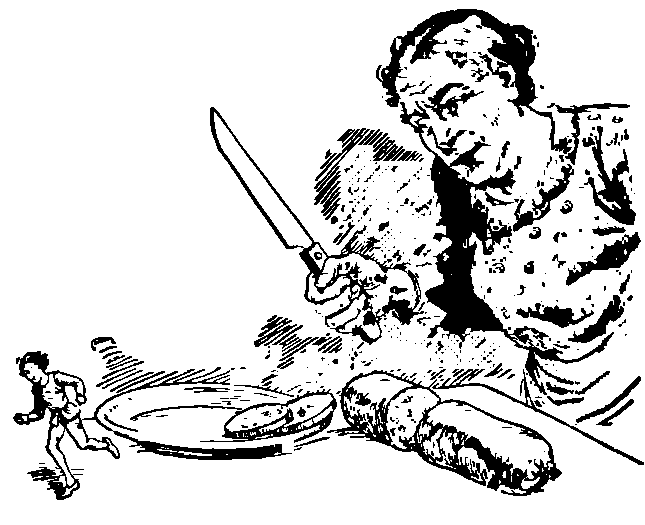 Please rate this story from 1 to 10 stars. 10 stars means you really liked it!
Rating: 7.89/10. From 71 votes.
Please wait...
- Total nr. of readings: 7,735 Copyright © The author [2020] All Rights Reserved. This story may not be reproduced without the express written permission of the author except for personal use.
Share? Thanks!

A beautiful story about a poor, sad girl who lives in a swamp, until one day a shepherd sees her sorrow and breaks the terrible spell.

In this funny re-telling of a Hans Christian Andersen classic, a poor farm girl dreams of sharing her tiny kingdom with someone who makes her heart sing and her soul dance.

How Tigers got stripes

This story is about a tiger named Danny who's ashamed he has no stripes.

Raggedy Ann learns an important lesson after leading a raid on the pantry.

A young girl's life abruptly changes in the year 2020.

The Wolf and the Fake News Story

Truly a story for our times. The wolf tells his side of the story with regards to the three pigs!