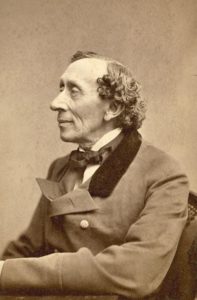 Hans Christian Andersen (Danish: [ˈhanˀs ˈkʁæsdjan ˈɑnɐsn̩]; often referred to in Scandinavia as H. C. Andersen; April 2, 1805 – August 4, 1875) was a Danish author and poet. Although a writer of many plays, travel journals, books, and poems, Andersen is best remembered for his fairy tales. Andersen’s popularity is not limited to children; his stories—called eventyr, or “fairy-tales”—express themes that appeal to people of any age and from any country. Andersen’s fairy tales, which have been translated into more than 125 languages, have become very well known around the world, appeal to children, but also teach lessons of doing good and being strong when things are bad for adults also. Some of his most famous fairy tales include “The Little Mermaid”, “The Ugly Duckling”, “The Nightingale”, “The Emperor’s New Clothes” and many more. His stories have been made into plays, ballets, and both live-action and animated films.

Story about an emperor who prefers the tinkling of a bejeweled mechanical bird to the song of a real nightingale.

A merchant’s son receives the gift of a flying trunk and flies to Turkey, where he tries to win the hand of the sultan’s daughter.

The Shepherdess and the Chimney Sweep

Two ornaments, the chimney sweep and the shepherdess, run away together so that she doesn’t have to marry a horrible wooden cabinet.

A loving sister risks everything to save her eleven brothers from the spell of a wicked witch.

The storks are annoyed that some boys are singing mean songs about them and try to think of a way to teach them a lesson.

The proud piggy bank, full of money, watches while all the toys perform at being human.

The Flea, the grasshopper and a frog have a jumping match to see who will win the lovely princess in marriage.

The little match girl lights her matches to stay warm in the freezing weather and is reunited with her loving grandmother.

Follow the adventures of little Thumbelina after she is taken away by an ugly toad.

Read about the brave tin soldier who remains calm despite all the terrible things that happen to him. Includes audio narration.

The little fir tree longs to be taken away from the forest but ultimately learns the value of being happy with what you already have.