The stream tinkled merrily through a great forest which lay for miles and miles, a green mantle over the hills and valleys, and Sally Migrundy’s tiny little cottage stood in the exact center of the great whispering forest. 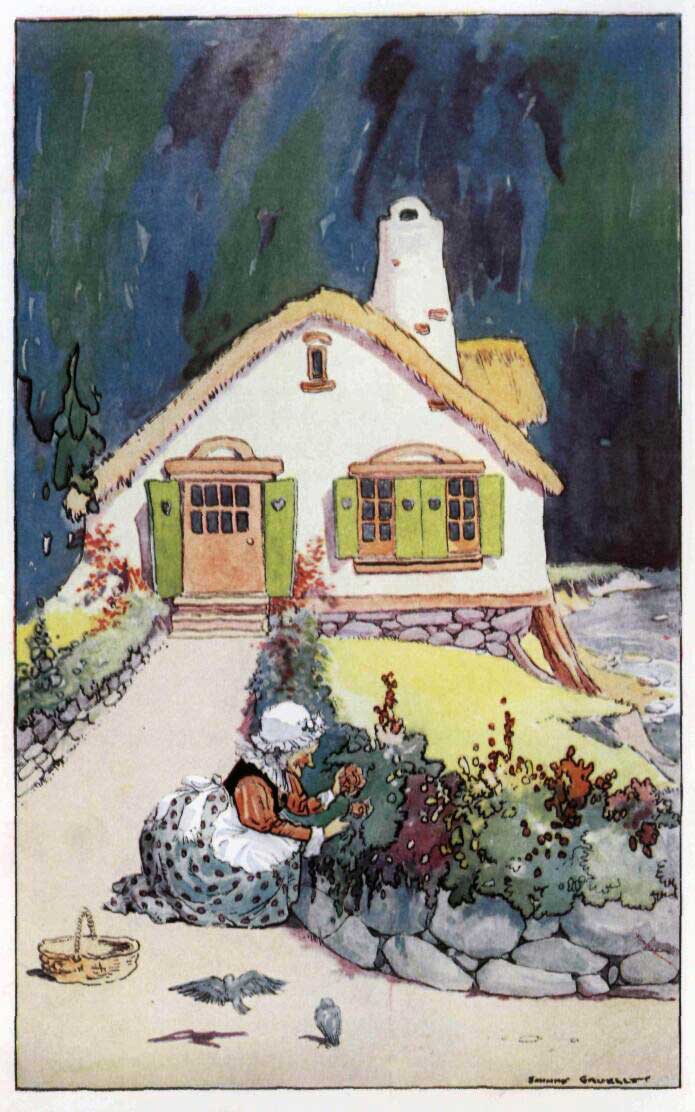 Each morning she would scatter food upon the surface of the singing stream and the lovely fish, their sides reflecting rainbow colors, would leap from the tinkling waters and splash about to show their pleasure. And she would place food about her little garden for the birds and they in turn repaid her by their wonderful melodies.

Even the mama deer brought their little, wabbly-legged baby deer to introduce to Sally Migrundy; and she rubbed their sleek sides and talked to them so they couldn’t but love her. 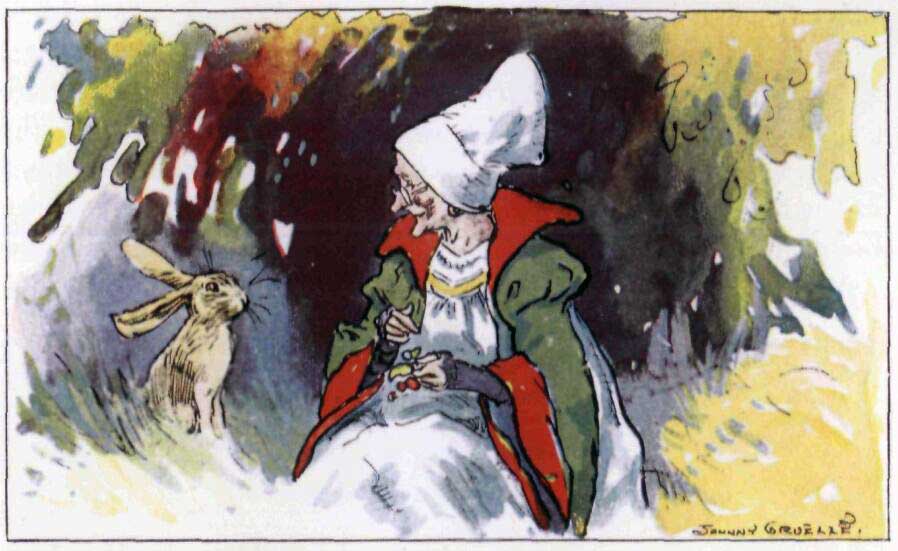 One day a man who lived on a hill many, many miles away from the whispering forest said to his wife: “Mother, wouldn’t you like to know where the water that flows from our spring goes to?” And his wife replied: “It must travel until it reaches the ocean!”

“Yes, I know that, mother” he replied, “but I mean, wouldn’t it be interesting to know all of the country through which the water flows?”

So the more they talked of it, the more interested they became until the man finally wrote upon a slip of paper and put the paper into a tiny bottle. Then he put the bottle upon the surface of the spring water and watched it float away. 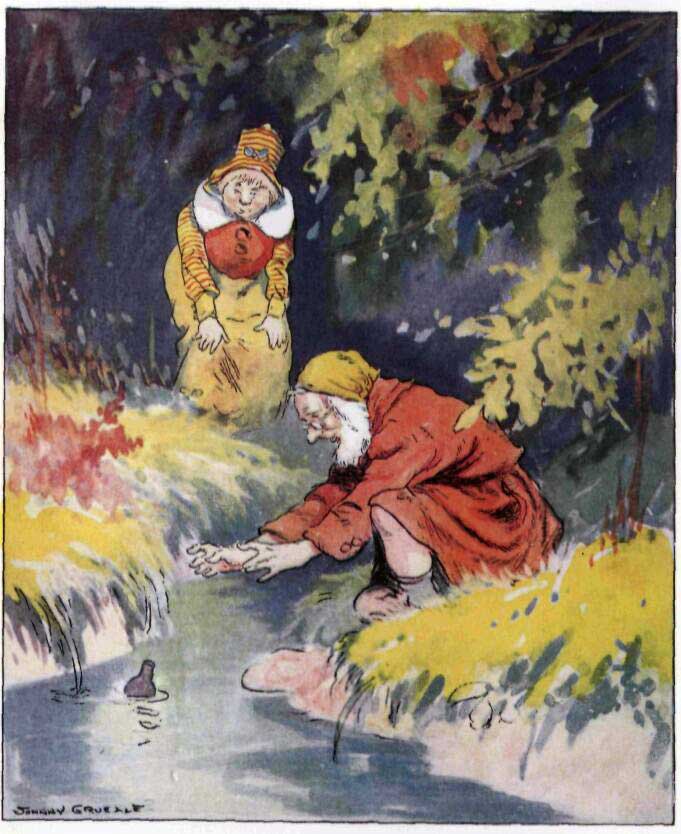 The little bottle floated along, tumbling over the tiny falls and tinkling ripples and bobbing up and down in the deep, blue, quiet, places until finally it floated to Sally Migrundy’s and came to rest in the mass of pretty flowers where Sally Migrundy came each morning to dip her tiny bucket of water.

And so Sally Migrundy found the tiny bottle and took it into her tiny house to read the tiny note she saw inside.

It was such a nice, happy-hearted note Sally Migrundy said: “I will answer it!” So she wrote a happy-hearted note and asked whoever read it to come and visit her. Then she put her note in the tiny bottle and sent it dancing and bobbing down through the whispering forest, riding upon the surface of the singing stream. And Sally Migrundy’s note floated along in the bottle until a little boy and a little girl saw it and picked it up.

And when they read Sally Migrundy’s happy-hearted note asking them to visit her they started following up the stream until after a long, long time they came to the tiny little cottage. 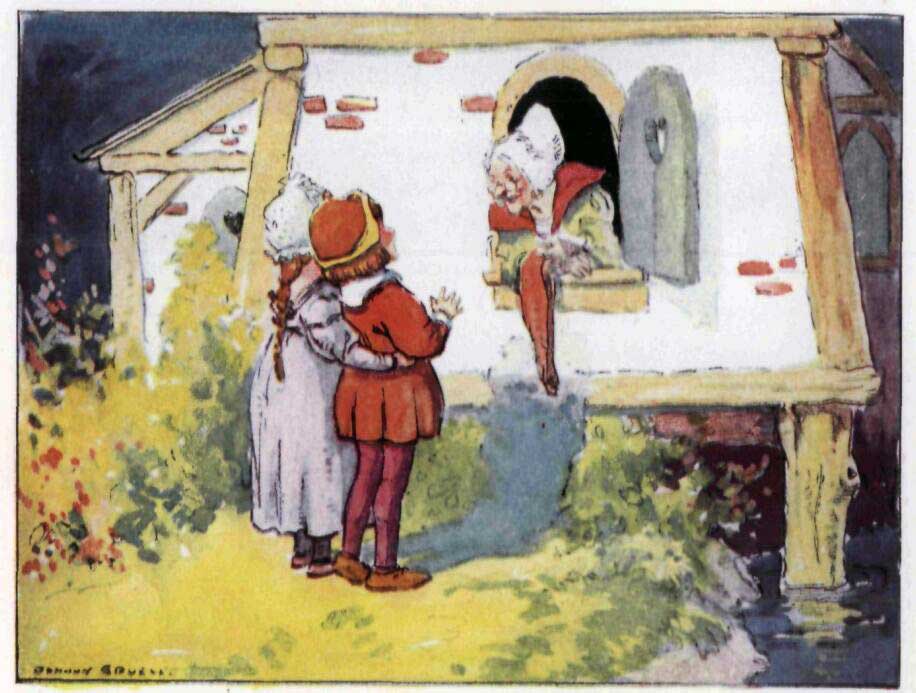 Sally Migrundy was very much surprised to see the two children, for she had almost forgotten she had written the invitation.

“Howdeedoo!” said Sally Migrundy, “Where in the world did you children come from?”

“We found a note in a bottle and traveled up the stream until we came to your little cottage,” they answered.

“But won’t your mamas and daddies be worried because you have been away from home so long?” Sally Migrundy asked.

“We are orphans,” the children said.

Then Sally Migrundy kissed them and asked them into her tiny cottage.

The door was so small the children had to get down upon their hands and knees to crawl through. But when they got inside they were surprised to find that the rooms were very large. In fact, Sally Migrundy’s living room was larger inside than the whole little cottage was on the outside, for, as you have probably guessed, Sally Migrundy’s cottage was a magic house.

And in one corner of the living room there was a queer stand with a silver stem sticking up through the center, and the stem curved over and down towards five or six little crystal glasses.

It was a magic soda fountain, as the children soon found out, and they could have all the soda water they wished at any time.

In another room were two little snow white beds. These belonged to them, Sally Migrundy told the children. As you have probably guessed, the magic cottage took care to make everything comfortable for those who came inside.

And when Sally Migrundy had shown the children their pretty bed room she took them to the dining room and there they found a table which had everything nice to eat upon it. And so the children ate and ate and ate, for the magic table knew just what the person wished for who sat at it. So you may be sure there were plenty of cookies and ice cream and candies and golden doughnuts and everything.

So the two little orphan children lived all the time with Sally Migrundy. And each morning when they tumbled, laughing and shouting, out of their little snow white beds, they found underneath a new present. So each morning they had a new toy to play with, for the magic beds knew just what a child would like most each day.

Sally Migrundy was very, very glad the children had come to live with her, so she wrote more notes and sent them down the singing stream, and more and more children came until Sally Migrundy’s house was very, very large inside, but still the same tiny little cottage on the outside. The singing and happy laughter of the children echoed through the whispering forest all day, and the ground about the cottage was filled with toys and playthings,—merry-go-rounds, sliding boards, sand piles, hundreds of sand toys, and play houses filled with beautiful dolls and doll furniture.

Each year Sally Migrundy sends happy-hearted invitations floating down the stream and more orphan children come to live with her. However Sally Migrundy’s tiny cottage is just the same tiny cottage on the outside. But when once you crawl through the tiny door, you look upon rows and rows of little rooms, each having one or more little snow white beds in it.

And, while Sally Migrundy remains a tiny little lady only two feet high, she has as much happiness inside as if she were as large as a great big mountain, for as you have probably also guessed, she is a fairy and can have as much room inside for happiness as the little magic cottage could have room inside for all the happy children.

Then he turned around and walked back up the stream from the ocean—up through the whispering forest until he came again to his home at the top of the hill.

“I followed the stream down through a great whispering forest, mother,” he said, “until I came to the sea. Then I turned around and came back the same way. It was a beautiful trip and when I came to the center of the great whispering forest there was a clearing at the side of the tinkling, singing stream, and the lovely fish leaped from the crystal waters and showed me their wonderful coloring, and the clearing was filled with beautiful flowers and the music of birds. And it was so beautiful I stopped and watched and listened.

“It seemed as if hundreds of children were playing around me, and although I could not hear them yet it seemed to me that I felt they were shouting and laughing at their play!”

“How wonderful it must have been!” said his wife.

“It was indeed very wonderful, mother. And when I returned I again stopped at the same place and sat and listened to the singing of the waters and the birds, and I saw the wild creatures come down into the clearing and act as if they were being fed, and all the time I seemed to feel the laughter and happy shouting of children at play. And a most delightful feeling of contentment and happiness came over me as if I sat within the borders of Fairyland!

“Then as I stooped to drink of the tinkling waters before I started on my way home, I saw, tied to a flower growing in the water, the tiny little bottle with the note inside which I had floated off a long time ago, so I brought it home with me!”

And from his knapsack the man took the tiny bottle and placed it on the table before his wife.

Every year the man takes his wife, and together they walk down the tinkling stream until they came to the exact center of the great whispering forest; there they sit for hours at a time, feeling the happiness that overflows from the hearts of Sally Migrundy and the children. And while the good couple have not been able to see the children or Sally Migrundy, or even the tiny magic cottage, they know they are all there, for at times they can hear the laughter and once in a while they feel the touch of a tiny hand. And when they return to their home upon the hill they find they have received enough happiness at the clearing beside the tinkling, singing water to last them for a whole year. 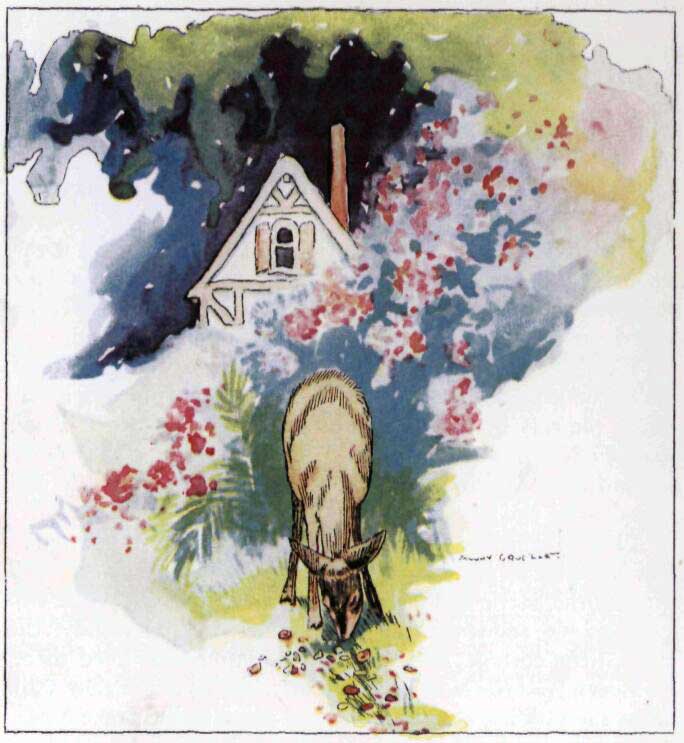 Please rate this story from 1 to 10 stars. 10 stars means you really liked it!
Rating: 8.61/10. From 46 votes.
Please wait...
- Total nr. of readings: 4,713 Copyright © The author [2020] All Rights Reserved. This story may not be reproduced without the express written permission of the author except for personal use.
Share? Thanks!

A stray cat in an assisted living facility falls in love with kittens.

Walter and the Dragon’s Tooth

Walter, a very special Weezle-wobbler, is helping his snail friend Munch find his missing glasses. When he finds a dragon's tooth, will it bring them luck or lead them to terrible danger?

Some of us have pets, the others own farmhouses. Have we ever wondered about what the animals do when we are away?

Vieda Vampa and The Mother of Flowers

This is a story about the first few days of a young flower's life - and about believing in yourself and trusting the people around you for love and protection.