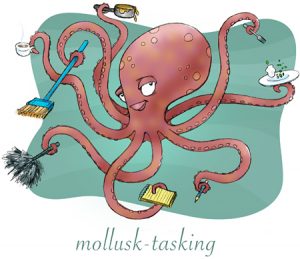 The fact he had too many legs annoyed him. Eight in fact. Eight, slimy, swivelling legs that squirmed in all directions. He couldn’t keep an eye on all of them. People in the village would yell in the streets, while he moved uncontrollably around the pavements.

“Control them legs of yours!”

“I can control the same amount of dogs on their leads, why can’t you control your own legs?”

He sprawled out in the armchair, inside his cottage, away from the world, trying his best to read the newspaper, that two tentacles were trying to hold. As he skimmed up and down the page, looking at the job column, he thought of all the jobs he was turned away from, due to several accidents. They were just mistakes, but legs don’t listen, do they?

He’d always loved ice cream. Not anymore, not since the day he took a job serving ice cream for children, in an ice cream truck. Ice cream and ice from the machine were juggled in the air, accidentally knocking equipment from shelves. His large pink arms jiggling up and down. Sugary ice deserts were thrown into the air, landing on children’s pretty Sunday clothes. Parents had begun to scream and point fingers at him. He was barred after that. Thrown out onto his limbs from the vehicle.

“Curse you, legs!” he muttered under his breath.

Back to the drawing board, or rather the daily newspaper. It seemed a leap but he accepted a job on a police desk. Everything quickly turned from bad to worse as soon as he slid through the front door. The ringing from telephones burst his eardrums, his legs swirled around trying to find which phone was ringing before the calls cut out. If it wasn’t bad enough, being told off for leaving phones ringing and not being attentive enough, he

Had accidentally punched a crime victim in the face. Not on purpose, just a mistake, it’s just that people in police stations, don’t really take kindly to being thumped in the face by many sticky tentacles.

“Sorry, you have a bit of …” He had tried scraping leg juice from their forehead, which ended in disaster. The man’s body flew in the air. His legs dangling from the ceiling. His torso balanced on the room fan. The police commissioner wasn’t entirely impressed, told him that it was the worst start to any job he’d ever seen, pointed, and showed him the door, which he struggled to squeeze through, causing a collision with a coat stand and bumping into the coats and hats as he left.

It may have seemed odd, but his next occupation was as a gardener for a sweet elderly woman. One week and he was settled into the job. He could water the roses with two of his eight limbs, trim the hedge with two others and plant with the other two. All was well until he was trusted with the lawnmower one day. Things were going smoothly until he accidentally ran over one of the purple pansies. The devil wheels started moving out of control. His grip was lost and he was being thrown around the garden attached to the demon machine. He cried out. His arms and tongue were moving all around.

It seemed the more he held on, the more it began moving faster. There was only one way, he had to brave it and peel his arms off the handle. WHOOSH! He flew into the sky just at the same moment that the old woman arrived home. He saw her confusion, seeing him flying in mid-air like a bird. He landed on the grass with a bang, his head felt like jelly, and as he tried to find all his feet and bounce back up, everything started to twirl. A pair of fluffy slippers stood at the foot of him. The world was spinning, so he couldn’t really focus, but when his eyes met that of the lady’s, he could tell anger was the stronger emotion visible on her face. She was tapping her feet, folding her arms, not saying a word, she just pointed to where, the now broken lawnmower, sat in tiny pieces, there was smoke around the fence where a gaping hole could be seen.

That was the last thing he saw before he was sent out and back looking at the job column once more. Again, another job involving flowers, but a florist couldn’t be that difficult after all, could it?  He had thought wrong. As soon as he had stepped foot in the shop, customers started fleeing, perhaps his reputation now preceded him. Working on the till, pressing in the numbers, seemed easy at first. He passed bouquets to scared-looking people who didn’t know what to expect. When handing a handful of roses, wrapped in paper, to a man waiting patiently, one of his arms locked onto his. It seemed unbelievable what happened next and everything raced out of control. One moment the flowers were firmly stuck inside his tentacles as he passed them over to the middle-aged man, who looked very sensible with his ironed shirt, the next moment the man was caught within his arms. The tentacles wouldn’t budge. The more the man pulled and pulled to be released, the firmer he stuck. His entire arm started detaching from the rest of his body! One large shove from them both and BOING! The arm sprung apart, bouncing from the ceiling. The blood poured from his shoulder, spurting out around the shop, spraying other customers in the face. Their faces were covered in deep crimson. The flowers on display now all resembled red roses.

He tried to help, but just like always, he just seemed to make things worse. Patting a cloth where the arm had been, he was swatted away like a fly. He even tried to mop down the red covered flowers, but the owner screamed that once the deed was done, all the floral display was damaged. With that disaster to top all disasters, he was dismissed. It really felt as though no luck was with him. What was the point in trying?

However, things work in mysterious ways. When people come to you insisting you will be perfect for something, you may be exactly that. That’s what happened. A tall, dark-haired man dressed all in black, the only colour visible was the deep red that was down inside his cape, saw the tentacles rushing around the streets in all directions. The public dipping and diving dodging his leggy obstacles.

“You! There!” he cried out jumping from the shadows.

“You are just what I’m looking for!”

“And what may that be for?”

“Look, it’s a kind offer, really, but I haven’t had much luck with jobs.”

“Ah! but this is different.”

“How about being a magician’s assistant?”

Everything was as it should be. No flying ice cream cones or angry victims, no lawnmowers, or arms flying through mid-air just exactly the job he was made for. Jumping inside tight spaces, squeezing his legs around his head. Not an issue for his sort! They pretended to cut him in two and magically he would leap from the table. The sound of laughter was a new concept to him, as it rang through his tentacles, vibrating.

The great thing was he stayed there until he was on his death bed, just over a year later, surrounded by fans and cheers, but no flowers allowed!

Please rate this story from 1 to 10 stars. 10 stars means you really liked it!
Rating: 8.21/10. From 38 votes.
Please wait...
- Total nr. of readings: 1,118 Copyright © The author [2020] All Rights Reserved. This story may not be reproduced without the express written permission of the author except for personal use.
Share? Thanks!

Meredith's move to Cape Cod seems regretful until she unveils her best kept secret and gains an unimaginable friend!

Sketch the Dormouse and the Bakers’ Spice

A new tale in the classic genre of Cat vs. Mouse. Sketch is hungry, but so is Knitty. When the dormouse finds himself dredged in flour, an escape into the snowy countryside seems like the safest bet, except he's also been dredged in catnip.

The story of a young girl experiencing the anxiety and exhilaration of being on-stage for the first time.

A migratory bird who suffers from travel sickness, a fear of heights and dislikes foreign food. That's a bit of problem, as you can imagine.

Poem about a huge dog who never goes out because he is too afraid.

Spend a day with Relly and Rolo! What shenanigans is Rolo up to now?