It was Thursday morning, and Mr Mole and his family were in the middle of building a new passage and some new rooms. The Mole family were always doing this, and they had the biggest house in The Hollow. All the family from Mr Mole to the smallest Young Mole helped. The very smallest and youngest mole of all was Maurice. His job was to clear out a new little room which Mrs Mole was going to use as a storeroom.

Maurice was very tiny, and he was quickly tired of his work.

“I wish I could go out,” he said to himself. “We’ve got a big enough house already. Why does Father want to make it bigger?”

“You get on with your work, my lad,” said Mrs Mole from the doorway. Maurice did get on with it – he didn’t know his mother had heard him.

When she had gone, Maurice sat in the middle of the new storeroom and looked very miserable.

Suddenly lumps of earth began to fall off the ceiling. Maurice jumped up. The whole room began to shake, and then part of the roof fell in altogether.

Maurice dashed through the door. “Help! Help!” he shouted, scurrying away from the storeroom as fast as he could.

“What’s all that noise about?” asked Mr Mole, popping out of the kitchen. Maurice almost knocked him down. He had run so fast he was quite out of breath.

“The house is falling down!” said Maurice.

“Oh dear!” said Mr Mole turning to his wife in the kitchen.

“But Dad, Dad!” said Maurice, who was very excited and could not understand why his father and mother were not rushing to take all the family out before all the house fell down.

A little later, Mr and Mrs Squirrel were drinking tea in their kitchen. Mrs Squirrel was just about to pour her husband another cup when the room began to shudder and shake.

He looked around the room. Plates, cups, saucers, saucepans were all dancing about on the shelves, and the knives and forks and spoons were jingling the drawer.

“Someone has got to put a stop to this,” he said firmly. He marched out of the kitchen and on to the branch. 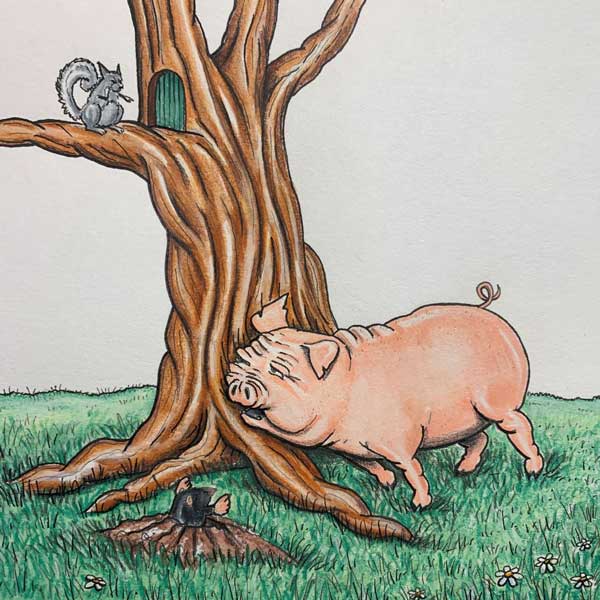 Piggy didn’t hear. She was much too busy enjoying a good scratch by rubbing her back against the trunk of the tree.

Piggy was huge. She was the biggest pig Farmer George owned. So big that she had won many prizes at shows.

Piggy stopped. Her great white head moved from side to side as she wondered where the voice had come from.

“It’s me, Piggy. Up here!” said Mr Squirrel. “You’ve done it again, you know, and you promised not too.”

Piggy looked up at Mr Squirrel with her very small eyes, and a very large grin lit up her big round face.

“I said, you have done it again after you promised not too,” repeated Mr Squirrel, folding his arms and trying to look stern.

Poor Piggy’s grin disappeared, and she looked very ashamed of herself. She looked at the ground and said in a quiet voice.

Mr Squirrel could never be angry with Piggy for long. She was such a good-natured animal and would never dream of hurting anyone or anything. Mr Squirrel scampered down the tree.

“Alright, Piggy,” he said. “I know you didn’t mean it, but you must be careful.”

Piggy’s big face grinned again. She knew she was forgiven.

“You big clumsy thing,” shouted a voice from down the hillside. Mr Mole was coming up and was out of breath.

“You’ve knocked down my new storeroom,” he panted, “and you nearly frightened poor Maurice out of his skin.”

At once Piggy looked very sad again, she moved from one foot to another as though she didn’t know what to do with herself.

Mr Mole was very annoyed because of all the work he would have to do again, but even he couldn’t help feeling sorry for Piggy.

“Oh! I wish I was small, like you,” Piggy said. “Then I could go all over the Hollow and not bother anyone.”

“No,” said Mr Mole, though he didn’t look as though he was quite certain.

“Oh! You’re just trying to be kind,” said Piggy. “I do try to be good,” she said. “But I just forget so quickly. Whenever I get hungry, I simply wander off to look for food. And I forgot about all the damage I might do. Oh! I do try so hard.”

Mr Mole was quite on Piggy’s side by now. He patted her knee, because that was as high as he could reach, and said, “Don’t worry, Piggy, it won’t take long to put the storeroom right. Besides, there’s nothing I like better than building.”

“Come on, Piggy,” said Mr Squirrel cheerfully. “I’ll lead you into the woods, and you can nose around there for an hour or two. Then I’ll come and take you back to the farm.”

Piggy beamed happily and almost knocked Mr Mole down as she was eagerly ready to go.

Mr Squirrel often had to do this. Whenever Piggy got out of the farm and wandered up The Hollow, any animal who saw her would lead her safely up to the woods. Mr Squirrel was the one who usually got the job. But it had to be done because of the great harm Piggy could do without knowing it. No one had been hurt or anything. Piggy had once walked over the warren, and her foot had gone right through the roof of Mr Rabbit’s kitchen.

That evening after Mr Squirrel had led Piggy back to the farm, some of the animals gathered at Mr Squirrels house. All of them knew Piggy very well, and all of them had had some damage done to their house by her.

“What can we do?” asked Mrs Waterfowl. Her house in the thick reeds by the river had once almost been crushed by Piggy when she had gone to drink in the river. “She’s so big.”

“It’s not Piggy’s fault,” said Mr Rabbit, thinking of the time when his foot had been crushed. “Farmer George is to blame.”

On Thursday mornings very early, Farmer George went to market. He was always in such a hurry before leaving that he never gave Piggy her food for the day. By the middle of the morning, Piggy was very hungry. And she would walk out through the broken fence and up The Hollow looking for something to eat.

“If Farmer George would do his job properly,” said Mrs Rhode Island Red, “There wouldn’t be any trouble at all.”

“Poor Piggy,” said Mrs Rabbit, “She only comes up here because she’s hungry. Farmer George should be ashamed of himself.”

Mr Badger was sitting quietly and listening to the animals talk. He coughed and said: “Well, there’s only one thing to be done. If Farmer George won’t feed Piggy on Thursdays some of us will have to do it. Then she’ll stay where she is.”

The animals looked at one another. “Oh! Dear! What a nuisance” said Mrs Waterfowl.

The next Thursday morning, Mr Squirrel, Mr Rabbit, and Mr Badger set off. They were carrying large bundles full of dock leaves, carrots, nuts – anything they could find. Farmer George had already left for market and had taken the dog with him. Mr Badger plodded on with his bundle over his shoulder. Mr Rabbit was dragging his bundle wearily along the ground, and Mr Squirrel was pulling his and looking very thoughtful.

Suddenly Mr Squirrel stopped. A broad smile spread over his face, and his old cunning look came into his eyes. But he went on again and said nothing to his friends.

Piggy was nosing about her empty pen when the three animals arrived at the broken fence.

“Here you are Piggy,” said Mr Rabbit. “This should fill you up.”

Piggy’s round face wore a delighted grin, and she waddled across the pen.

“Just a minute Piggy,” said Mr Squirrel. He was looking carefully at the fence around the kitchen garden, and it was crammed full with fine vegetables of all kinds.

The fence was not very strong, like most other fences on the farm it needed mending.

“You get up on top,” Mr Squirrel said to Mr Rabbit, “and pull when I tell you to. And you Piggy lean against the fence here and push when I say so.”

“What are you doing?” asked Mr Rabbit climbing on to the fence.

Mr Rabbit pulled for all he was worth, and Piggy pushed hard. The fence crashed down on to the lettuce bed and threw Mr Rabbit into a rhubarb patch.

Piggy’s face was a picture of joy. She forgot all about the bundles the animals had brought and rushed across the broken fence into the kitchen garden. Before long Mr George’s tidy kitchen garden was in a dreadful state and Piggy was sitting in the middle of the carrots munching steadily.

“Whatever did you do that for?” said Mr Rabbit.

Mr Squirrel twitched his whiskers and winked at his two friends. “You’ll see,” he said.

By the time Mrs George came into the kitchen garden, Piggy had eaten half of almost everything there was to eat.

“Oh!” screamed Mrs George, quite white. “Go on, get out! Get out!” Piggy went back across the broken fence, looking rather fatter than before. Mrs George was in a terrible temper. When Farmer George came home from the market, she was very angry with him.

“It’s all your fault,” she said. “If you had mended those fences that pig would never have got out.” And before Farmer George had his tea, his wife had sent him out to mend the fences. He mended all the fences, Piggy’s too.

Up on the hillside, the three animals laughed and laughed as Farmer George worked on the fences.

“Well,” said Mr Badger to Mr Squirrel “You are a clever one. We shan’t be bothered by Piggy again.”

Mr Squirrel tried to pretend he had done nothing.

“We couldn’t have done it without Piggy,” he said. “We shall go down to see her every Thursday.”

“And take her something to eat,” said Mr Rabbit.

Please rate this story from 1 to 10 stars. 10 stars means you really liked it!
Rating: 8.82/10. From 78 votes.
Please wait...
- Total nr. of readings: 4,912 Copyright © The author [2020] All Rights Reserved. This story may not be reproduced without the express written permission of the author except for personal use.
Share? Thanks!

A baby turtle shells out a lot of courage in order to face his fear of thunderstorms.

Everyone is mean to the poor little duckling and calls him ugly. Follow his adventure to find out where he really belongs.

Told from the dog's point of view, this is a story of a small town dog with a simple life who gets his 10 minutes of fame.

How the Checkered Bunny Found a Home

This story tells the tale of the lengths to which sisterly love can go in search of the perfect gift.

The story is about a gorilla and how the other animals started to imitate his innovative new dress sense.

Peter receives a pair of pyjamas from his Granny, however as soon as he starts to wear them at night, strange things start to happen.