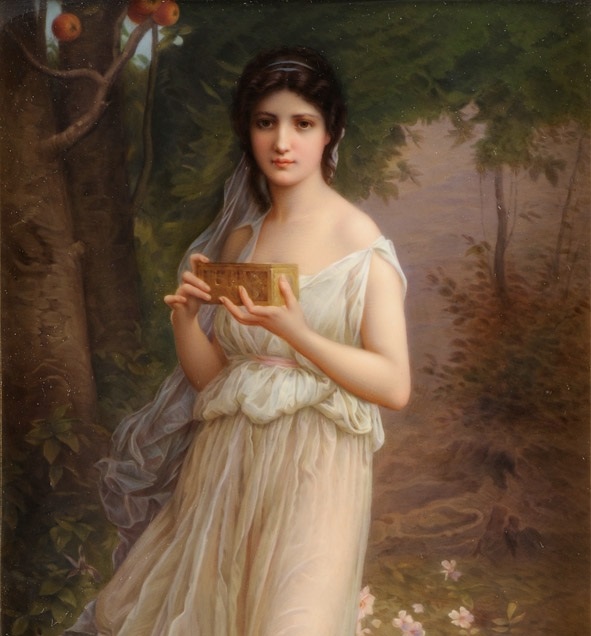 Pandora couldn’t sleep. She kept thinking about that box she wasn’t supposed to open. And was it past midnight by now? If not, it was still her first day of existence.

She thought back to how her day and indeed her life had started. Up on Mount Olympus, Zeus had ordered Hephaestus to create Pandora from water and earth. As soon as she was formed, the other gods started giving her gifts. Aphrodite gave her beauty, Hermes gave her the ability to talk, and Athena gave her fine clothes to wear. She was also given necklaces, jewellery, and a tiara. At this point, Pandora was feeling really good about herself. It was only her first day of existing, after all. She must be really special for the gods to be giving her so many wonderful gifts!

After all the other gods had given her a gift, Zeus himself stepped forward. He handed her a magnificent box and told her not to open it.

“Why not?” she asked. Being so new, Pandora’s mind up to now had felt like it wasn’t fully formed. It was a sensation like being only half-awake. That moment, when she questioned something for the first time, might have been when she finally started to develop real, concrete thoughts.

“Because I have ordered it,” said Zeus.

“But why?” Pandora persisted. This didn’t make any sense to her.

“I am the king of the gods and you will obey me,” said Zeus. “You are also to go down to earth and marry a man named Epimetheus.”

“What does ‘marry’ mean?” asked Pandora.

“Marriage is a beautiful thing,” said Hera. “It means you devote yourself to someone else and you two become partners in life.”

“But I don’t even know this Epimetheus!” Pandora objected. “How can I marry him?”

“You were created to give him companionship,” Zeus explained.

And so, Pandora walked down from Mount Olympus, carrying the box which she wasn’t allowed to open. She had only just been created and already she had a lot to think about.

If her purpose in life was to give companionship to Epimetheus, she supposed she ought to do it. But why were thoughts counter to that swimming around in her mind? She found herself thinking that maybe she didn’t want to marry Epimetheus, that her being ordered to do so wasn’t fair. If giving companionship to Epimetheus was the purpose for which she was created, why had she been given the ability to think these thoughts? It didn’t make sense.

And what was in the box? Why wasn’t she allowed to open it? If Zeus said not to open it, he must have had a good reason, but why wouldn’t he share the reason with her? Why was the box given to her if she wasn’t allowed to open it? Would she be allowed to open it when she got to Epimetheus? She hoped so. She was really curious about it. She kept wanting to take just one little peek inside, but resisted it. She told herself that if she was supposed to open it later, she would feel really bad about opening it now. She could be patient. She could be good. But why had she been given the ability to think of doing otherwise? Could she actually do otherwise?

Pandora stopped walking, suddenly overcome by doubt. Who was she? Well, that seemed pretty straightforward. She was Pandora. She was created by the gods. She was to be the wife of Epimetheus. She was the person carrying the box she wasn’t allowed to open. This was her whole identity, literally everything she knew about herself. If she deviated from that, she would know nothing, almost be nothing, but the only identity she did have was full of questions and contradictions. It was so scary. Who was she? Who was she, really?

Pandora shook herself and continued on down the mountain, still not opening the box.

“Hello,” she said to him, trying to smile pleasantly. “I’m Pandora.” Suddenly, her hands, still holding the box, started to shake. She felt really nervous!

“Yes!” Pandora exclaimed and she ran forward. Finally, her questions would be answered! “Do you know what’s in the box? Zeus told me not to open it.” She handed the box to him.

“I don’t know,” said Epimetheus, “but I know I wouldn’t open it.” Pandora’s hopes crashed, but she felt glad that at least the box wasn’t only her problem now.

“I’m supposed to marry you,” she explained eagerly.

“Of course you are,” Epimetheus replied rather cynically. Pandora felt like her heart was being crushed. Marrying Epimetheus was supposed to be her purpose in life! If he didn’t want her, what meaning did her life have? Who was she if not Epimetheus’s wife?

“I… I d-don’t understand,” she said, her voice shaking.

“Let me explain it to you,” said Epimetheus. “I helped my brother Prometheus steal fire from the gods and give it to humans. Zeus was very angry and punished him by chaining him to a rock. And now he’s sent you down here to punish me.”

“I don’t want to punish you!” exclaimed Pandora at once.

“Well, that’s what you were created for,” said Epimetheus.

Finally, she decided to tell Epimetheus the truth.

“I don’t know why the gods created me,” she said. “They told me I was supposed to give you companionship. I don’t know if that’s true, but I’ll be your wife if you’ll take me.”

“I believe you are sincere,” Epimetheus replied. “I will marry you.”

As they were married that afternoon, Pandora continued thinking. The gods had told her to marry Epimetheus and had not explicitly told her to punish him, so she could be a good wife to him without being in defiance of the gods. She had decided that that was what she would do for now. If both Epimetheus and the gods agreed on something, she supposed she ought to do it.

But would the gods come along later and tell her to punish him? If they did, what would she do? Would she defy the gods? Whose side was she on? Being new to the world, Pandora felt she had no way of knowing who was right and who was wrong. Punishing Epimetheus felt wrong to her, but maybe it was right if that’s what the gods wanted. Or was Epimetheus wrong about her being there to punish him? Maybe he was just paranoid. If he was paranoid, why would he think that and why would Zeus want to give a wife to such a person?

As she lay in bed that night, Pandora was still thinking about these things. It was really quite a cruel thing to create a being for the purpose of delivering a punishment and then give that being the ability to think and feel and question. She thought of how confused she had thought she was when she had been walking down Mount Olympus. That now felt like a long-ago age of innocence, a time when her life had a clear purpose.

And what was in the stupid box? She had spent the first hours of her life carrying that box all the way down from Mount Olympus. She felt like the box was almost part of her, and now it was clear that she would never find out what was actually in it. It wasn’t fair! But Epimetheus and the gods had both told her that she should not open the box, so she supposed that she shouldn’t.

Pandora sat up. Her life made no sense! Since she had been created, she had had a million questions and nothing had been explained to her satisfaction. She was mad. Why had the gods made her like this? She could dimly recall the beginning of her life when she had thought that she must be very special, but she sure didn’t feel special now. She still had all that gold and jewellery, but now it meant nothing. She didn’t want pretty clothes and jewellery. She wanted answers!

She got up, walked across the room, and picked up the box. What was inside the box? Did it contain the answers? It would at least contain the answer to the question of what was inside the box. Why shouldn’t she open it? Because the gods told her not to? Why should she listen to them? They hadn’t treated her right. They had given her a life full of questions and explained nothing. She felt more confused than ever about who she was and what the purpose of her life was supposed to be. They should have explained those things to her, but they hadn’t. If they weren’t going to explain anything, then she was going to find out on her own! That would show them!

Pandora opened the box and all the evils to plague humanity were released, just as Zeus had planned from the beginning.

Please rate this story from 1 to 10 stars. 10 stars means you really liked it!
Rating: 8.18/10. From 168 votes.
Please wait...
- Total nr. of readings: 7,560 Copyright © The author [2020] All Rights Reserved. This story may not be reproduced without the express written permission of the author except for personal use.
Share? Thanks!

Little Tommy Tucker sings for his supper, but will he ever find marital bliss?

The Tailor of Gloucester

Where is Mommy Going?

Have you wondered why your mom spends her whole day in the office? Is she having a lot of fun without you? Zinco’s mom went to work too. He followed her one day and this is what he found out.

Shankar, a poor fisherman, is granted three wishes by the King of the Sea but, because of greed, he and his wife Lakshmi lose everything that they get.