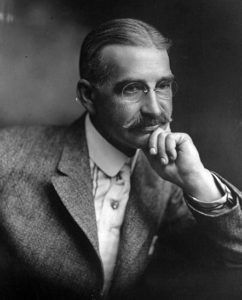 Lyman Frank Baum (May 15, 1856 – May 6, 1919), better known by his pen name L. Frank Baum, was an American author chiefly known for his children’s books, particularly The Wonderful Wizard of Oz. He wrote thirteen novel sequels, nine other fantasy novels, and a host of other works. He wrote 55 novels in total, plus four “lost” novels, 83 short stories, over 200 poems, an unknown number of scripts and many miscellaneous writings. In 1900, Baum and illustrator William Wallace Denslow (with whom he shared the copyright) published The Wonderful Wizard of Oz to much critical acclaim and financial success. The book was the best-selling children’s book for two years after its initial publication. Baum went on to write thirteen more novels based on the places and people of the Land of Oz.

Ozma and the Little Wizard

Princess Ozma and the wizard journey through Oz to make sure everyone is content. When they come across three nasty imps, they have their hands full to deal with them.

Jack Pumpkinhead and the Sawhorse

Princess Ozma sends Jack Pumpkinhead with The Sawhorse to save two children lost in the woods. Can he rescue them from the squirrels that have captured them?

Tiktok and the Nome King

The Nome King smashes Tiktok, the Clockwork Man, but immediately regrets it. Can he be put together again?

Dorothy and Toto fall into the hands of the dreaded Cricklink, but is he as bad as he seems?

The Cowardly Lion and the Hungry Tiger

The Cowardly Lion and the Hungry Tiger wish to show everyone how fierce and powerful they are. However when the moment comes to prove it, they can’t help being kind and nice. (This story is not for the very sensitive.)

The Wonderful Wizard of Oz

L. Frank Baum’s classic about a girl from Kansas transported to the land of Oz is a must-read for all children. Although this is in fact a short novel of about 40,000 words, one chapter a night (on average about 10 minutes each) makes for perfect bedtime reading!