Thumbkins ran beneath the bushes and down the tiny path until he came to where Tommy Grasshopper sat upon a blade of grass swinging in the breeze.

“I have been asleep,” replied Tommy Grasshopper, “And I haven’t seen her!”

“Oh dear! Oh dear!” cried Thumbkins. “She has not been home all day!”

“Perhaps she went over to see Granpa Tobackyworm!” suggested Tommy Grasshopper, as he flicked his wings and made the blade of grass swing up and down. 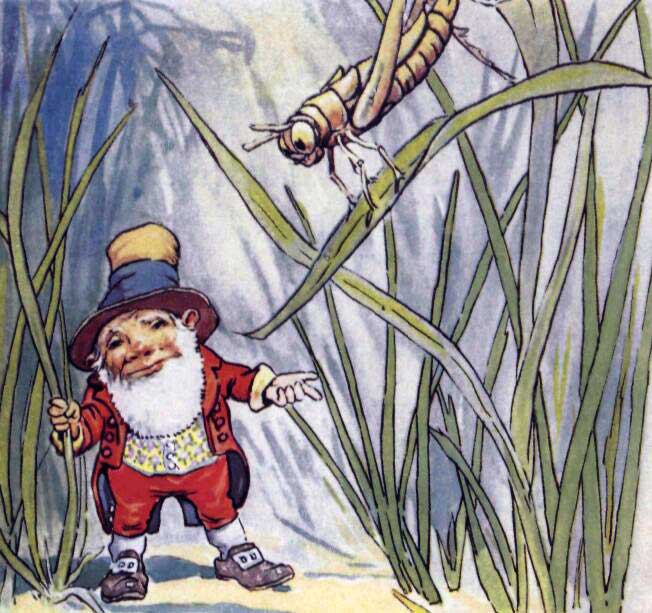 So Thumbkins thanked Tommy Grasshopper and ran over to Granpa Tobacyworm’s house.

Granpa Tobackyworm was sitting upon a blade of grass, swinging in the breeze and smoking his old clay pipe.

“Oh, Granpa Tobackyworm! Have you seen Mrs. Thumbkins? She has not been at home all day and I can not find her!” cried Thumbkins.

“Yes, I saw her early this morning going down the path with her acorn basket,” said Granpa Tobackyworm as he blew a few rings of smoke in the air. “Perhaps she has gone to the Katydid grocery store to buy something,” Granpa Tobackyworm added as he bounced up and down on his blade of grass.

So Thumbkins thanked Granpa Tobackyworm and went on down the tiny path.

“Hello, Thumbkins!” cried a cheery voice as Thumbkins ran under a bunch of flowers. “Where are you going in such a hurry?”

Thumbkins saw Billy Bumblebee sitting upon one of the flowers, swinging in the breeze.

“Mrs. Thumbkins has not been home all day!” said Thumbkins. “And I can not find her anywhere!”

“HUMMMM!” replied Billy Bumblebee. “Let me think! HUMMMM!” This was his way of thinking very hard.

“Perhaps she has gone over to see Granpa Tobackyworm, Mr Thumbkins!”

“No!” replied Thumbkins, “I went there, and also over to the Katydid store, but she was not there!”

“Let us fly way up in the air so that we may look down over all the country!” said Billy Bumblebee, as he made his wings whirr and climbed high in the air.

Billy Bumblebee and Thumbkins looked over the country carefully, but they could not see Mrs. Thumbkins anywhere.

Finally Billy’s sharp eyes discovered something shiny down by the side of the pond, so they flew down towards it. It was a new tin can house. The door was closed.

Thumbkins alighted from Billy Bumblebee’s back and knocked at the door.

“GRUMP! GRUMP!” said a deep voice from inside the tin can house. Billy Bumblebee peeped through a chink in a window, and saw a hoppy-toad with his mouth full of pancakes.

So Thumbkins picked up a pebble and knocked louder. TONKY-TONKY-TONK!

Old Man Hoppy-toad came to the door with a pancake in each hand and another large one in his mouth. “GRUMP! GRUMP!” he said.

“Where is Mrs. Thumbkins?” Billy Bumblebee demanded, as he buzzed around Old Man Hoppy-toad’s head.

“I don’t know!” said Old Man Hoppy-toad when he had swallowed the pancake.

“Yes, you do!” Thumbkins cried as he caught Old Man Hoppy-toad’s hand. “Who made those pancakes for you?”

So Thumbkins ran to the kitchen and came out with Mrs. Thumbkins. Old Man Hoppy-toad had locked her in the kitchen so she would have to bake lots and lots of pancakes for him.

Thumbkins was so glad to see Mrs. Thumbkins he came very near crying. And Billy Bumblebee said to Old Man Hoppy-toad, “Now you must leave our neighborhood, for we do not permit anyone to bother anyone else in the Town of Tinythings.”

So Old Man Hoppy-toad had to pack up all his things in a red handkerchief and hustle out of town.

And Billy Bumblebee buzzed right around his head as Old Man Hoppy-toad went down the path “Lickity split-Hoppity hop!” and never once looked behind him. 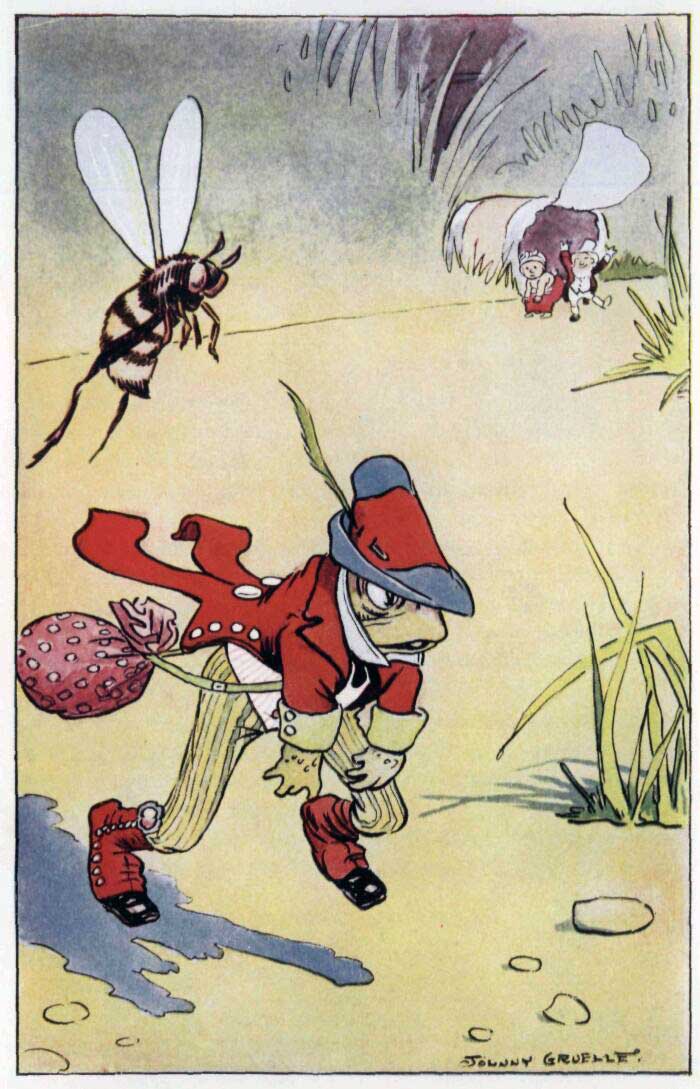 Thumbkins and Mrs. Thumbkins went back home, and when Billy Bumblebee returned and told them he had made Old Man Hoppy-toad go ‘way down to the river they knew they would never be troubled with him again.

Mrs. Thumbkins said she had fried pancakes all day but she was not too tired to fry more. So she made a lot of pancakes, while Billy Bumblebee flew home and returned with a bucket of honey, and they had so many pancakes Mrs. Thumbkins asked Billy Bumblebee if he would fly around and invite all the neighbors in to help eat them.

Tommy Grasshopper, Granpa Tobackyworm, and all the other friends of the Thumbkins came and ate the lovely pancakes, covered with the delicious honey.

And, after eating as much as they could, everybody caught hold of hands and danced until late in the night, for the Katydid orchestra was there to furnish the music. 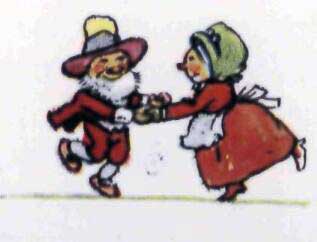 Please rate this story from 1 to 10 stars. 10 stars means you really liked it!
Rating: 8.11/10. From 56 votes.
Please wait...
- Total nr. of readings: 3,864 Copyright © The author [2020] All Rights Reserved. This story may not be reproduced without the express written permission of the author except for personal use.
Share? Thanks!

Cinderella gets to go to the ball thanks to her kind fairy godmother.

The little match girl lights her matches to stay warm in the freezing weather and is reunited with her loving grandmother.

Piggi and Giggi are amazed when they enter a strange house that laughs and smiles at them.