Can Billy and Ellie save the world from Bloop? 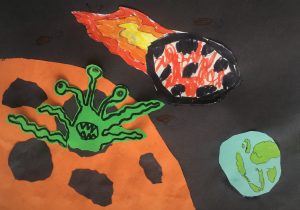 Far away, on a distant planet called Bakuka, there were strange green aliens with three eyes, sharp teeth and long tentacles. Deep in the core of Bakuka were some wires. One of the aliens, called Bloop, muddled up his tentacles and accidentally cut a blue wire instead of a red one. Suddenly his whole world began to shake and rumble.

“What’s that?” exclaimed Bloop, in a language only he could understand.

He poked some eyes out of his jagged rocky hole and saw meteors – one of them really big – rushing towards a planet we call Earth. It was in great danger of destruction.

“Oh what have I done?” exclaimed the ashamed alien.

On Earth, when the rumbling started, buildings began to collapse. Some people thought it was an earthquake. Some said it was a volcano.

Billy and Ellie lived in a tiny cottage in the centre of a city called Exeter. They loved science and maths so they knew about earthquakes, volcanos and astronomy too. They soon worked out what was happening.

“It’s those bright lights shooting in from space and shaking us up. Probably stars or big rocks,” said Billy.

“Meteors,” said his sister Ellie. “Wait a second – if lots of small meteors are hitting Earth then there could be a really big one coming soon.”

“Yes,” said Billy. “We have to be prepared for that. Let’s warn everybody.”

When they got to the city centre Billy and Ellie saw the mayor was having a big meeting in a ruined theatre. They got up on the rickety stage and shouted to the crowd.

“Listen everybody there’s a giant meteor coming to Earth – we need to get ready.”

The mayor and grown-ups started laughing and walking away. But the children were listening carefully.

“Come with us if you believe us,” Ellie shouted to them. Billy was studying the big heavy planks of the stage, and a hole underneath…

All the children worked hard and soon made the hole bigger.

One of them pointed to the sky: “That star is very bright for daytime.”

Ellie looked up: “What? Aaah – get inside NOW – everybody !”

All the children quickly disappeared into the hole and slid the planks over their heads.

“What’s going to happen?” one of them asked.

One whooshing noise was much louder than the others. Billy and Ellie peeked out. “It’s a really big meteor,” they shouted to the children below: “It’s very close.”

They dropped the plank shut just in time. BANG – their deep hiding place shivered and wobbled. Then silence.

Ellie and Billy peered out again and started coughing. There was smoke and ash and bits of buildings and plants everywhere.

A little girl climbed up beside her. “Mum? Dad?” she mumbled.

One by one they climbed out of the big dirty hole. Everything bigger than the children was destroyed – buildings, cars, trees, all covered in hot red dust. The grown-ups had gone too.

The children were stumbling toward a giant glowing meteor when Ellie cried, “Nooo !”

Under the meteor were the remains of their old cottage.

That was when the red-hot rock started to glow blue. Big thick chunks were falling off like a landslide – and shadowy shapes were appearing.

Ellie and Billy look at each other and rubbed their gritty eyes. Dragons? Wizards! A two-headed snake! Are those really unicorns?

The dog smiled and out came a Devonshire accent:

“Exeter eh. All right me ’andsome?” asked the dog. “Sorry ’bout that gurt great bang. We’ve been tryin’ to escape a ’orrible grockle called Bloop. He wanted our magic powers – accidentally sent us crashing down ’ere.”

One of the dragons looked around at the flattened buildings and trees and roared: “This is a right mess – can we help?”

The children all looked at each other and screamed “YES!”

Ellie took control: “Dragons – you could make the buildings better. Unicorns – please bring all the trees and plants back.”

Billy butted in: “Oh two-headed snake – can you get rid of the fire and ash? And witches – please do bring the animals and fishes back.”

The big Poodle dog nodded: “And I’ll keep everyone safe – no more meteors.”

Then Billy and Ellie bravely walked over to a dragon that was a bit different to the others. Sharp-eyed Ellie said, “That blue button that’s strapped on your back – what does that do?”

The dragon stooped down and whispered in Ellie’s ear: “Well… this brings back grown-ups who are dead.”

Billy gathered the children around, waved the blue button and announced, “You won’t believe this but we can now bring our parents back to life.”

“Boooo – we don’t want parents,” they shouted back. The children had been having too much fun with the unicorns and wizards, though some were getting hungry and others did miss their bedtime stories.

Ellie joined Billy and was surprised to hear herself saying, “Listen – we need them back. We’re going to do this anyway.”

For a while, the button did not seem to work. Then slowly, in the distance, people started emerging, walking towards them. The children screamed and raced to meet the tall figures: “Mum! Dad! Granny! Auntie!”

But Billy and Ellie were looking somewhere else. Behind the new trees, they glimpsed a cottage – their cottage!  Newer and better than before. And a note was pinned to the door. In splodgy writing it said:

‘Thanks for being kind to us on Earth. This is a little present.’

Strangely, when the grown-ups came over to see the note the writing became invisible.

And so did the dragons, and the wizards, the two-headed snake, the unicorns and the big talking French poodle…

Please rate this story from 1 to 10 stars. 10 stars means you really liked it!
Rating: 9.66/10. From 41 votes.
Please wait...
- Total nr. of readings: 599 Copyright © The author [2020] All Rights Reserved. This story may not be reproduced without the express written permission of the author except for personal use.
Share? Thanks!

The Children of Lir

The legend of the four Children of Lir, turned into swans for nine centuries by their wicked stepmother.

After a big fight with his mum, Mark decides to run away and right into a space adventure.

After spending their lives on the boat playing with dolphins, navigating and cooking - two young sailors now find themselves alone on a remote beach.

Cuddlemuddle in the Monsters’ School

The little monster Cuddlemuddle has to learn how to arrange chaos in childrens' rooms. Find out how he gets on.

A red-breasted robin with a busy modelling career is horrified one morning to discover that its beautiful red breast has turned white!

The Smile On Her Lips

‘Smile On Her Lips’ is a heartfelt, profound story. Katie is very excited to surprise her grandma, but receives a shock herself. This story shows how Katie is inspired by her grandma.