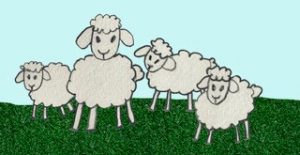 Farmer Mick and his dog Tiger lived on a sheep farm. One morning they set off in the truck to buy some sheep. When they arrived at the market they bought four sheep called Magic, Big Rogue, Slick and Pixie. Tiger helped load them onto the truck and soon they were on the way back to the farm.

One day when Farmer Mick was in town, Magic made his way to the top of the hill. When Big Rogue, Slick and Pixie caught up, Magic called them to a meeting.

‘Right,’ said Magic. ‘I like this farm. Farmer Mick owns the best farm ever and we must be very clever to get to all that beautiful grass. Because our coats are the same colour as the grass, when we get there we can disappear very easily.’

‘Look,’ said Big Rogue, ‘I can see plenty of Weeping Grass over there.’

‘Yes, and I can see a big field of Windmill Grass further on,’ said Big Rogue.

Pixie pushed her way to the front and gave a little jump so she could see better.

‘Let me see, let me see,’ she said. But by then the others were walking back down the hill to the farm and she had to run after them.

When Farmer Mick returned, they were all standing quietly next to the farmhouse gate.

The very next day Magic put their plan into action. As soon as the coast was clear Big Rogue pushed against the fence until he had made a gap. Slick and Pixie came to help and soon they could all squeeze through into the next field where the tall Weeping Grass was growing. They ate and ate until they were all very full. Because the grass was so high they disappeared from view.

Farmer Mick and Tiger looked everywhere but couldn’t find the clever sheep so they decided to look for them in the morning.

Pixie was lying in the middle of the field and Magic, Big Rogue and Slick were a little further away. Their tummies were full and it was such a warm day that they all fell sound asleep. When they woke up the stars were out.

Very, very early the next day, Magic and the mob pushed at the fence until they could squeeze through into the field with the Windmill Grass. What a feast they had. The seed heads were full and the tips of the leaves were small crunchy and sweet, just what they liked best.

‘Well, I’ll be blowed,’ Mick said to Tiger, ‘where are they? Did I buy invisible sheep?’

The fact that Farmer Mick thought they were all invisible made Pixie giggle and soon they were all trying not to laugh out loud. Magic was trying to keep them quiet. But it was too late, Tiger heard them and the game was up.

‘Well, well, well,’ said Mick, ‘my four white sheep are not invisible, they are just very clever. They are also very greedy and have grown quite fat on all the grass they have eaten. So off they go to the sheep sales.’

The next day as the four clever sheep were being taken to the sale yards Magic began to tell them about his next plan.

‘No, no, no,’ said Pixie,’ no more of your plans Magic, from now on I will be the leader because I am the smallest.’

‘No, no, no’ said Slick, ‘I will be leader because I am the strongest.

‘You are both wrong, it will be my turn because I’m the biggest,’ said Big Rogue.

No one knows where they are now but you can be sure they will all still be arguing.

Please rate this story from 1 to 10 stars. 10 stars means you really liked it!
Rating: 7.68/10. From 79 votes.
Please wait...
- Total nr. of readings: 3,825 Copyright © The author [2020] All Rights Reserved. This story may not be reproduced without the express written permission of the author except for personal use.
Share? Thanks!

The Bread King and Butter King

This is a story that teaches about friendship and unity.

A poem about a girl who lives with her family on an island on a great lake.

The Girl Who Had Wings

A girl has the most beautiful wings. But can she fly?

Poem about a meeting a great-grandson for the first time.

Stingy Jack and the Jack O’Lantern

Poor Humpty Dumpty learns the hard way about the dangers of sitting on walls.