It’s a bit cramped in the drawer where I have been snoozing for many years. At least Ute wrapped me in her knitted purple shawl which smells of powdered milk and the rose petals she gathers. I am not complaining but I am lonely, longing for the warm embraces she gave me during our inseparable childhood years. I dream a lot and remember. 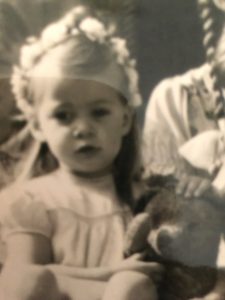 I was her favourite toy. On her second birthday in her homeland of Silesia, I landed among several dolls her uncle had sent from Paris. Ute looked at them only long enough to strip off their fancy clothes and don me instead. I was her companion, carried “huckepack” to the sandbox, and at night her arms encircled me. I have to admit I was gorgeous then with a fluffy tabby coat and sparkling amber eyes. My paws were dark brown as were the tufts in my perky ears. Ute whispered into those ears. She treated me like a baby. She parcelled out the apple slices she liked to nibble on. She would rock me in her arms and hum as I pretended to sip a chocolate drink from a tiny bottle with a pink nipple. I never even glanced at the other stuffed animals in the nursery. I wanted no other playmate.

My ears also picked up her hardships when we were forced to flee from the invading Russian troops in 1945. I could see shock and fright in Ute’s eyes when she clutched her grandmother’s leg in the transport train carrying wounded soldiers, and nearly lost her grip on me. And tears wetted the inside fuzz of my ears when she was quarantined in a children’s hospital after contracting diphtheria. A nurse snatched me from her arms and handed me to her mother. It’s a miracle I survived. Besides my ears, the best part of my body is my nose, black like a tulip of the night and sparking like onyx. Tiny threaded crowfeet encircle the edges and give my nose a bemused crinkled look. When Ute plants little kisses on my nose, I breathe in her love.

Much has changed over eighty years. We both have aged. But while Ute is moulded by life’s seasons, much of my deterioration was brought about by my handlers. Ute shares some responsibility for the damage because she bathed me frequently and my fluffy teddy body does not like water. When I was waterlogged, I had to dry on the porch in the sun. Ute lifted me up periodically to see if there was a puddle beneath my behind before I was allowed back inside. But the greatest harm was done when she went to the hospital. I was lucky not to be thrown into the dumpster but was instead doused with a rancid disinfectant. After her return, Ute vigorously brushed my fur but that only caused more shedding. Adding to my troubles, my beautiful eyes vanished during her absence. I think they just popped out. Ute’s mother saw what had happened and quickly sewed black buttons into my old sockets. I was distraught. When Ute and I were reunited, she hugged and consoled me.

“We can see each other without eyes,” she affirmed. “We see each other with all the fibres of our being.” She was only eight years old when she said that. Because my paws had also suffered from being scrubbed, I now wore mittens and socks.

“At least they keep you warm,” Ute mumbled and rubbed my paws between the palms of her hands.

Before I go on, I should tell you my name. Ute was a thumb-sucker. In a children’s book about bears, one little cub sat and sucked its paws.  The caption read: “What would Börle do without its paws?” Ute chimed in, “What would I do without my thumb?” So, we both had similar ways of calming ourselves. Ute took to my name which she pronounced with tenderness, stretching the letters B…ö…r…le…. 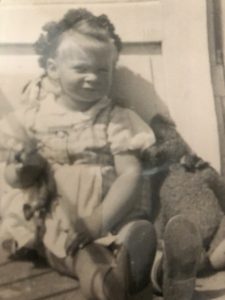 Let me return to the wondrous months and years we shared. I already mentioned our physical closeness, the constant squeezing and hugging. But the daily experiences were most precious. After the war, Ute and her family found refuge in West Germany. That’s where Ute built a hide-away in the hollow of a thickly entangled bush, away from buildings near a lake. It was an arduous task and required many trips to bring in supplies. She fortified the roof and walls with branches and pieces of cardboard. She covered the floor with tattered blankets. A large sheepskin hide, leathery and mouldy at the edges, she folded up and laid at the back of the enclosure. It kept the draft out and could be unrolled into a wrap for us on cold or wet days. In that secure hideout (that not even her mother knew about) we huddled together while Ute read to me. Stories from books borrowed from the library or stories she made up. I liked those the best. They tumbled from her mouth, one more fanciful than the other. She would interrupt her telling, look inquisitively at me and ask, “Börle, how should we end this tale?” One afternoon she read me the “Velveteen Rabbit” which made us both choke up with sympathy. Later I inspected myself and proudly concluded that I was not as used-up as that poor rabbit. However, in the late evening hours when my mind began to empty and start toward sleep, a trance-like flash popped up and I recalled that at the end of the story the velveteen rabbit turned into a real rabbit. Might I one day become a real bear?

School days lasted only until noon and when Ute had finished her chores at home we often retreated to our secret abode. Sometimes I had to stay there by myself because Ute would race back home for a book she had left behind or for her notebook with the many coloured pencils. She sometimes sketched me leaning against a gnarled stump sticking out of the soil at the far end of our cosy nook. I thought she did a fine job of portraying my likeness. When Ute was not telling a story or drawing, she sang children’s songs her mother and grandmother had taught her. There is one I particularly love even though I often have trouble recalling all five verses. However, the main lyrics remain vivid as ever…Geh aus mein Herz und suche Freud in dieser schönen Sommerzeit…. When I get teary remembering that verse, I turn sentimental and doze off.

I have been moved from one storage place to another, especially when Ute changed residences. Sometimes I was stuffed into her backpack, a suitcase or a box. On a cold winter day, she would tuck me into the “Fellsack,” the fur-lined travel bag which had served as her foot warmer on the railway platform when we were fleeing from the advancing Russians.

Later, when she was busy with work, she would rarely lift me out. But when she did she would look at me and whisper, “Sweet old Börle. What am I going to do with you? To others, you may appear expendable but to me, you will always be irreplaceable. Nobody will ever appreciate our friendship as I do.” Before returning me to storage she would give my little snub nose a gentle pinch.  Now I must wait. I yearn for the rare attention and the infrequent hugs. We are both old. I am worried what a stranger might do with me, a worn ugly toy. My courage has shrivelled, what will become of me?

The fateful day was bound to arrive. It was Ute’s constant coughing and wheezing that brought me to the dreaded conclusion that the time was near. And then a few nights ago it happened. It was a golden, moonlit night, one that sends us dreams. Ute approached with feather-light steps and freed me from the drawer. She unwrapped me tenderly and pressed me to her chest. Breathless, in a hoarse voice, she confided, “Maybe, my sweet old friend, it is time I let you go. I’ll just put you under my favourite rosebush. You like the sweet smell and the delicate shades of pink. That would not be so bad, right? A reminder of our childhood hideout? I am not well and will have to leave for a while. Nobody else should find you!”

I shivered, and as she held me tight a bear-like growling brumm…brumm…brumm escaped my belly. Ute hesitated, then stopped abruptly. Even in the dimness of the room, I could see her troubled frown melt into a smile. Then, she wrapped me back up in her knitted purple shawl and kissed my nose.

“Not now,” she sighed and stuffed me back into the drawer, a bit brusquely, I admit. I am grateful that the time of our parting has not yet come. I can continue to snooze and dream and remember. 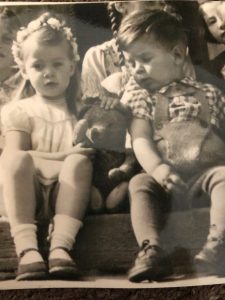 Please rate this story from 1 to 10 stars. 10 stars means you really liked it!
Rating: 9.88/10. From 8 votes.
Please wait...
- Total nr. of readings: 139 Copyright © The author [2020] All Rights Reserved. This story may not be reproduced without the express written permission of the author except for personal use.
Share? Thanks!

My kitten is cute and soft, yet she is a terror to all. Learn more about her antics here.

Learn about the town of Kallerbay through stories by its young people there - a stray dog saves an elderly lady, a nice granddad janitor and two boys put a ball through a grouchy neighbour's window.

VIDEO: Teased and bullied about his stuttering, Stanley the squirrel refuses to let on that his feelings are being hurt, until one day he learns an important lesson from a new friend.

Some of us have pets, the others own farmhouses. Have we ever wondered about what the animals do when we are away?

A king is determined to find out where his twelve daughters go dancing every night and offers a reward to anyone who finds out.

A clever prince looks after pigs to try and win the heart of a princess. But is she worth winning?