Mikaleen and the Stone Soup 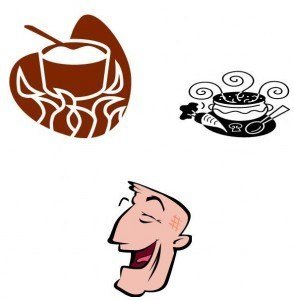 Mikaleen was a Travelling Man. He spent his life travelling around Ireland, visiting people in their homes..

In every house he told them the news he had picked up on his travels. There were no newspapers or televisions in those days and people were always keen to hear the news from Mikaleen.

Mikaleen would recite poems, some of which he had made up himself.  Then he would play a few tunes on his tin whistle.  This made the people very happy and they would always give him a good meal. If it was getting dark, they would ask him to stay the night. They always gave him some money.

One day Mikaleen called at the home of Owen and his new wife Norah.  They had a nice house and a fine farm with cows, hens, ducks and lots of geese.  They never kept pigs. A pig had caused a lot of trouble to Owen when he was a single man and he never bothered with them after that.

Owen and Norah were starting to sit down to eat their dinner, and they immediately asked Mikaleen to join them.  Mikaleen told them the all the news, recited a poem and sang a few songs.  He also played some lovely tunes on his tin whistle.  Owen gave him a shilling.

‘I’ll call to the McCarthys next,’ said Mikaleen, before he left.

‘But the McCathy’s have sold their farm and gone to America,’ said Norah. ‘Another couple called the Meaneys are living there now.’

‘You’d be wasting your time calling on them,’ said Owen. ‘They are a miserable pair. When the people around here were helping old Widow Kelly to cut her grass, the Meaneys were the only ones who wouldn’t help!’

‘Last week one of my geese wandered into the Meaneys’ fields and when I went to  look for it, Mrs Meaney told me she saw the goose flying away over the hills.  When I called the next day, I knew from the smell that they had eaten the goose for dinner!’ said Norah.

‘They are both greedy and stupid,’ said Mikaleen. ‘I will do three things to them. First, I’ll get them to feed me. Then I’ll get them to give me five shillings and later I’ll tell people see how silly they are.’

Then Mikaleen waved goodbye to Owen and Norah and headed for the Meaneys’ house. On the way he picked up a stone from the road and wrapped it up in his handkerchief.

When Mikaleen knocked at the Meaneys’ house, there was no reply.  But Mikaleen knew they were at home because he could see smoke coming out of their chimney.  After knocking many times, the door was opened a little and a woman shouted out:’go away. We have nothing for you.’

Mikaleen said: ‘I want nothing but a little water.  I have a magic soup stone.  If I put it in water, it will make the loveliest soup you have ever tasted.’

The woman then opened the door.  Her husband stood beside her.

‘Show us this magic stone’ they said, ‘and let us see how it works.’

Mikaleen stepped inside.  He took out the stone from his pocket and told the Meaneys to put more wood on the fire.  He asked them to put water into a saucepan and to heat it.

‘This is the magic soup stone,’ he said as he dropped it into the saucepan.  ‘We will have nice soup very soon.’

While the Meaneys watched him, the water began to heat up.  Mikaleen tasted a spoonful of it.

‘It needs some pepper and salt,’ he declared.

Mrs Meaney gave him some pepper and salt and he put them into the water.

Mrs Meaney gave Mikaleen slices of beef and mutton and he threw them into the saucepan.

‘It needs onions, carrots and potatoes,’ he said.

When Mrs Meaney gave him these, he added them to the soup.

Mikaleen poured the soup into the bowls and the three of them sat at the table and began eating it.

The Meaneys were delighted with the beautiful soup and told Mikaleen that his magic stone was wonderful.

Then Mikaleen heard Mrs Meaney whisper to her husband:

‘Buy the magic stone off this beggar-man. Then we can have lovely soup every day at no cost.’

Mr Meaney offered Mikaleen a shilling for the stone, but the travelling man would not take less than five shillings.  Mr Meaney finally handed over the money with very poor grace and grabbed the stone greedily.

Mikaleen put the five shillings in his pocket and left the Meaneys’ house.

For the next few weeks, in all the houses  he visited, Mikaleen told the people about Mr and Mrs  Meaney and how they had paid him five shilling for a worthless stone. Everyone thought this was the funniest thing they had ever heard and they laughed and laughed.

Please rate this story from 1 to 10 stars. 10 stars means you really liked it!
Rating: 8.52/10. From 109 votes.
Please wait...
- Total nr. of readings: 0 Copyright © The author [2020] All Rights Reserved. This story may not be reproduced without the express written permission of the author except for personal use.
Share? Thanks!

The twins, Sam and Sid, go to stay at their aunt's place during their holidays. Hyperactive and easily bored, the twins do not imagine the adventures that await them in the remote town. Their ride into an unknown world begins when one of them eats an unknown fruit and falls unconscious. Read on to go into their bizarre magic world.

A story about a frog called Franklin who can speak to humans, but it gets really interesting when it turns out he can also sing and dance!

An adventurous gang of children discover they are sharing their beloved wood with some pesky, meddlesome fairies.  Something has to be done to reclaim their wood.

No More Peanut Butter in the Jelly Jar

A young boy struggles to do things like his big brother does.

When the moon is big and bright, watch for magic to come alive before you.

The Epic Battle Between Chimera and Narasimha

2 thoughts on “Mikaleen and the Stone Soup”