The ex flamencoing flamingo in Space

The youngest astronaut was called James, and it was nearly his thirtieth Birthday. He was very excited but was not yet sure how he would celebrate his birthday as they did not have balloons or bouncy castles in Space.

As his birthday got closer, the other members of the International Space Station crew would often whisper and giggle without James knowing why. He was not sure what they were planning, but thought there could maybe be a special birthday surprise.

The days ticked by. The astronauts were quite busy doing experiments, but they also had some time to watch programmes using a video link. One day, after they had finished their work, they all watched a video about a new dance craze called flossing. They had lots of fun learning the dance move, especially as gravity is very different in space to how it is here on Earth.

James was very pleased with his flossing and went to sleep happy that he had learnt something new.

That night he had a peculiar dream. In his dream, he was walking through a leafy forest when he came upon a lake. He heard a funny noise and turned round to see a marvellous flamingo.

James was very shocked to hear the flamingo say good morning and ask him how he was, but the flamingo looked very friendly so he wasn’t frightened. He told the flamingo about his job on the International Space Station. By the time they had finished chatting, James had even told his new friend about his newfound love of flossing.

Suddenly the flamingo whipped out some castanets and began to tap his feet rhythmically, performing the most beautiful flamenco that James had ever seen or heard. James clapped along excitedly. The flamencoing flamingo danced and danced until James was tired of clapping, let alone how tired the flamingo must have been. They both fell about laughing.

Just then, James’ alarm clock went off, and, as he woke up, he realised that it had all been a peculiar but lovely dream. Then he remembered it was his birthday today. He sprung out of bed and floated to where the crew met for breakfast.

As he entered, his friends were all there, waiting to wish him a happy birthday. In the middle of the table was a big foil balloon in the shape of…….a flamingo! James couldn’t believe it after his dream. The astronauts all ate their breakfast and laughed about their flossing moves the day before.

When they had finished breakfast, James’ friend suggested that today they all learnt a new dance to celebrate James’ birthday and said how about…….flamenco!

James nearly choked on his coffee but agreed that it would be lots of fun, especially as he thought his dream may have given him a head start. He couldn’t tell the other astronauts about his dream in case they thought he was silly.

They all got ready to learn flamenco dancing.  James looked at the big foil flamingo balloon and smiled and gave it a wink and, just as magic sometimes happens on birthdays, the flamingo balloon gave him a secret wink back. It was the strangest but best birthday that James ever had. 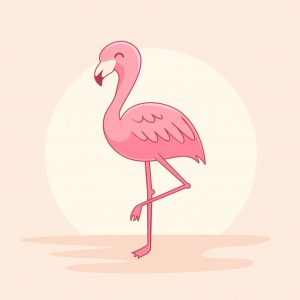 Please rate this story from 1 to 10 stars. 10 stars means you really liked it!
Rating: 8.20/10. From 204 votes.
Please wait...
- Total nr. of readings: 7,724 Copyright © The author [2020] All Rights Reserved. This story may not be reproduced without the express written permission of the author except for personal use.
Share? Thanks!

Danny’s just moved and feels out of place, so he leaves home and keeps walking, not knowing he’ll make the oddest friend he’s ever had.

Ava and Seán get stuck inside a huge bubble and get carried off to Gubble Bubble Land for a great adventure.

Miss Muffet is minding her own business having a little down-time but the spider is having none of it.

How stars came into existence.

John and Anna are friends. They help each other. Anna can't walk very well.