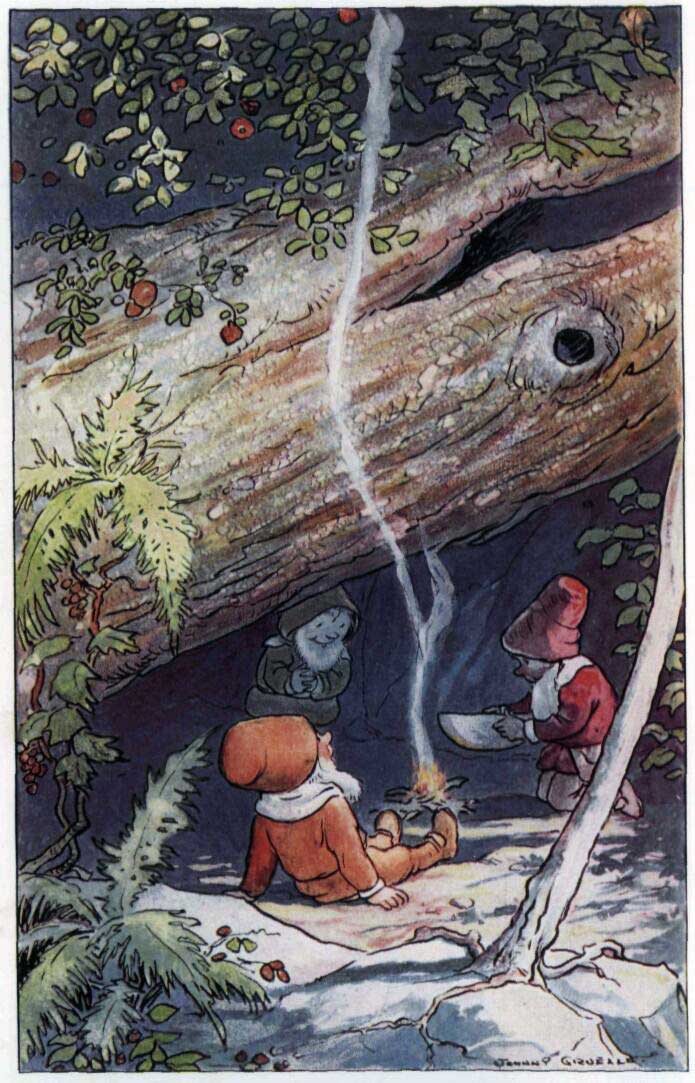 Long, long ago, the tree had stood strong and upright and its top branches reached far above any of the other trees in the forest, but the tree had grown so old it began to shiver when the storms howled through the branches. And as each storm came the old tree shook more and more, until finally in one of the fiercest storms it tumbled to the earth with a great crash.

There it lay for centuries, and vines and bushes grew about in a tangled mass until it was almost hidden from view.

Now down beneath the trunk of the fallen tree lived three little gnomes, and it was the smoke from their fire which curled up over the trunk of the old tree and floated away through the forest.

They were preparing dinner and laughing and talking together when they heard the sound of a horn.

“It sounds like the horn of a huntsman!” another cried.

As the sound came nearer, the three little gnomes stamped upon their fire and put it out so that no one would discover their home. Then they climbed upon the trunk of the tree and ran along it to where they could see across an open space in the forest without being seen themselves. And when the sound of the horn drew very close, they saw a little boy climb through the thick bushes.

As the little boy came out into the open space the three little gnomes saw that he was crying.

“He must be lost!” said the first little gnome.

“Let us go and ask him!” said the third little gnome.

So the three little gnomes scrambled down from the trunk of the fallen tree and went up to where the little boy had thrown himself upon the ground. They stood about him and watched him, for he had put his face in the crook of his arm and was crying. 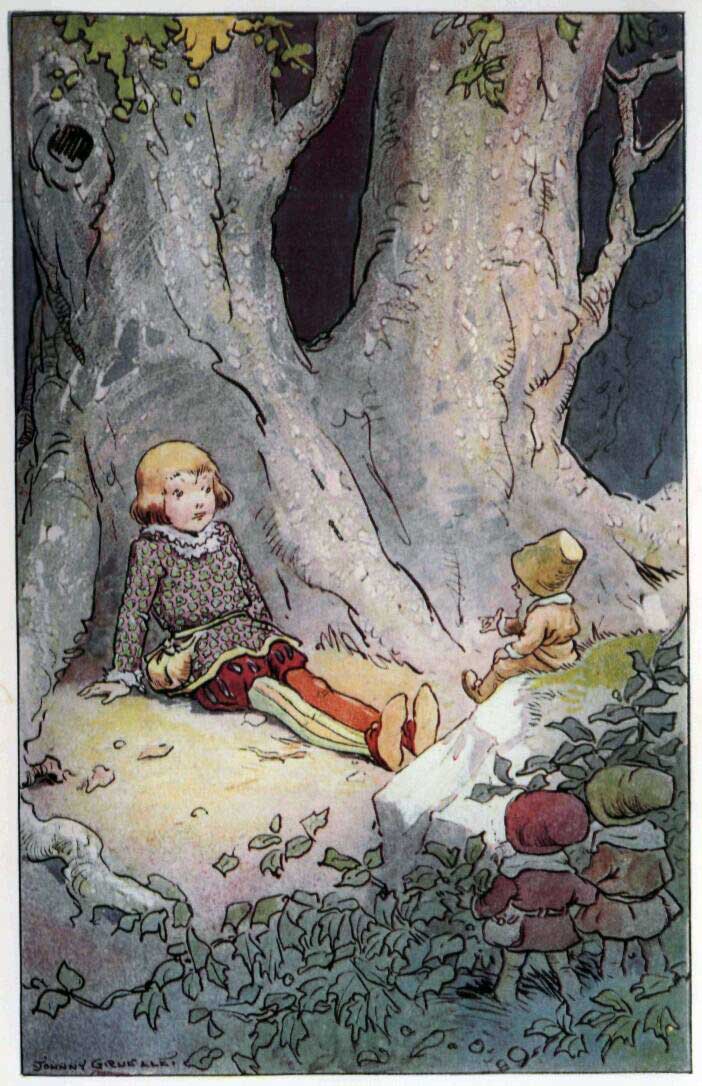 “I am lost!” the little boy said. “My father went hunting yesterday with all his men and when they were out of sight I took my little horn and followed them, but I soon lost their track, and I have wandered about with nothing to eat. Last night I climbed into a tree and slept!”

The three little gnomes wiped the little boy’s eyes and led him to their home under the fallen tree. There they finished preparing the dinner and sat about until the little boy had eaten and had fallen asleep.

Then the three little gnomes carried him into their house, away back in the trunk of the tree, and placed him upon one of their little beds.

When the three little gnomes had finished their dinner they lit their pipes and wondered how they might help the little boy find his way home.

“Let us go to old Wizzy Owl and see if he can suggest anything!” said one.

So the three little gnomes went to the home of Wizzy Owl and Wizzy Owl said he would fly high above the forest and try and see the little boy’s home. 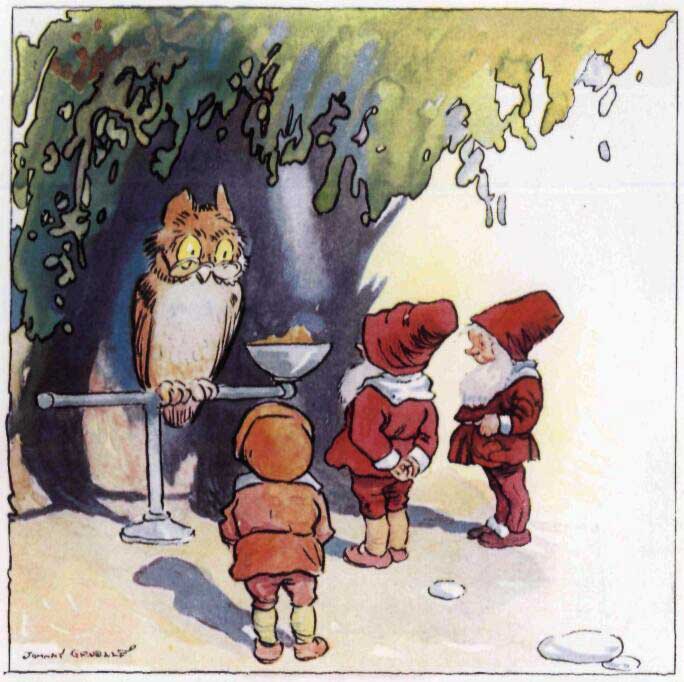 “I can not see his home!” cried Wizzy Owl. “Maybe Fuzzy Fox can tell you!”

Then the three little gnomes sat upon Fuzzy Fox’s back and he ran on through the forest with them until they came to a wild boar.

The wild boar had been crippled by the huntsmen, he told the three little gnomes, but had managed to hide himself in the thick bushes and escape. “It must have been the little boy’s father and his men,” said the wild boar. “I am sorry that I am wounded for I would like to help him!” 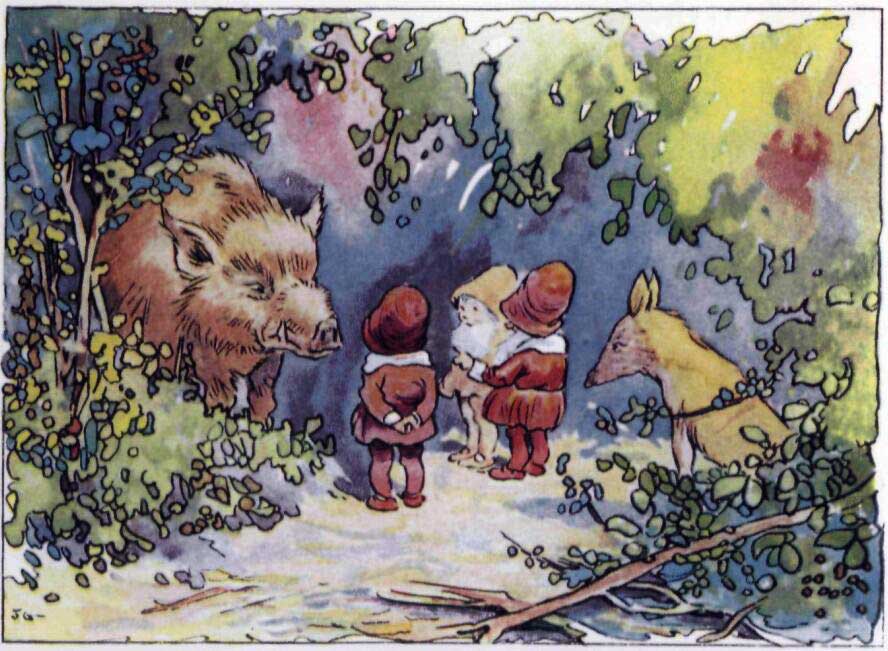 The three little gnomes felt very sorry for their wounded friends and helped them all they could by washing their wounds and tying them up. “We are sorry that we can not go with you and help find the little boy’s home,” they all said, “For his mother will miss him and cry for him. And we know how much a Mamma or a Daddy can miss a little boy or girl, for we have all grieved for our own little ones that the huntsmen who roam this forest have killed. That is why we feel sorry that we can not help you bring him back to his mother.”

So Fuzzy Fox ran until he came to the edge of the forest and then the three little gnomes saw a large castle away in the distance with bright red roofs on the tall towers.

“That must be the little boy’s home!” said one little gnome.

“Let us return at once to our home under the fallen tree and ask the little boy!” said another. So Fuzzy Fox ran with them back to their home and the little boy told them it was his home. 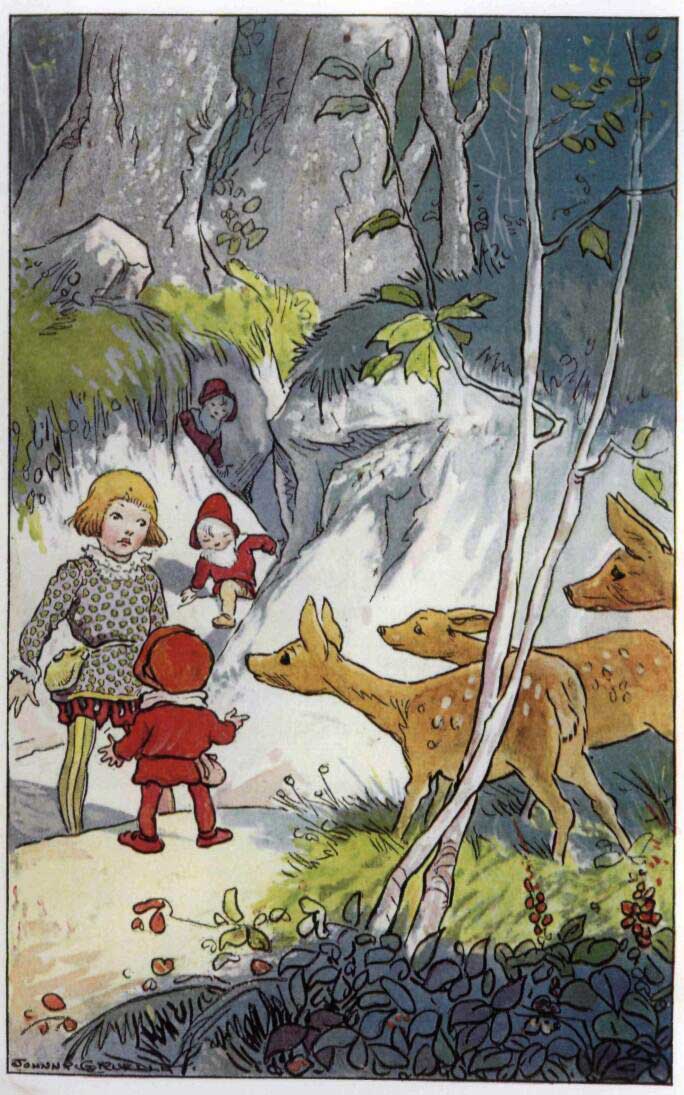 Then the kind Fuzzy Fox took the three little gnomes and the little boy upon his back and ran to the edge of the forest and on the way they stopped to see the wounded animals, and they were all glad that the little boy’s Mamma and Daddy would soon see him. “Oh, if we could only see the children who have been taken away from us by the huntsmen!” they said as they bade the little boy goodbye.

So Fuzzy Fox carried the three little gnomes and the little boy almost to the castle gate and shook hands with him.

“I will remember the way to your home,” the boy told the three little gnomes, “and I will be back to see you soon!”

The next day when the three little gnomes were preparing dinner they again heard the little boy’s horn, and ran along the trunk of the tree until they came to where they could see across the open space.

Soon there came a great many people, and riding upon a fine horse in front of his Daddy was the little boy, but this day he wore fine silk and satin clothes and they were not torn by the brambles and bushes. Near him rode a beautiful lady. She was the little boy’s Mamma.

So the three little gnomes went out to meet them, and the little boy slid from the horse and ran to them and threw his arms around them. “This is my Daddy, and this is my Mamma!” he told them.

“We wish for nothing!” said the three little gnomes, “We live happily here in the forest and our wants are simple, but if you could send us some clean white cloths to bind up the wounds you give our forest friends we would be very grateful!”

“I told Daddy of the wounded creatures!” said the little boy. “Yes,” his Daddy said, “and I have given orders that no one in my country shall hunt through this forest, and from now on your forest friends will be unmolested and can always live here in peace and happiness.” For the great king was sorry that he or his men had ever caused any of the forest creatures any sorrow. And after that the creatures of the forest were never harmed and they grew up so tame they would wander right up to the castle, where the king’s men would feed them. 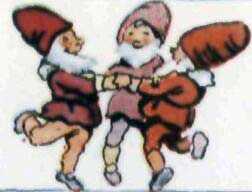 Please rate this story from 1 to 10 stars. 10 stars means you really liked it!
Rating: 8.23/10. From 158 votes.
Please wait...
- Total nr. of readings: 16,453 Copyright © The author [2020] All Rights Reserved. This story may not be reproduced without the express written permission of the author except for personal use.
Share? Thanks!

A lesson in the dangers of pork theft.

The Most Frugal of Men

A man who takes pride in spending as little money as possible sends his son to learn from the most frugal man in the world.

More stories about the town of Kallerbay, through stories by its young people there. Stories 13-15 included.

A poem about a cobbler who uses some leftover leather to make a purse with rather wonderful properties.

Faithful John sacrifices himself in order to save his master, the king.

5 thoughts on “The Three Little Gnomes”