The Adventures of Bird 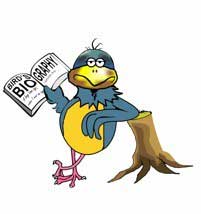 Once upon a time there was a very large bird. His name was Bird. Although he had a bad memory it was an easy name for him to remember – children were always pointing at him saying ‘Look at that bird!’ which helped him remember his name when he had forgotten it. But one-day Bird could not fly. He tried, but he could not. He loved to soar high in the sky, loop-the-loop and dive-bomb chickens. He made the chickens envious as they couldn’t fly, and they ran at full pelt towards him in an attempt to get off the ground and chase him away. But to no avail. Mostly the chickens got up to quite a good speed, stirring up great clouds of dust, almost taking off, but crashed into the wire mesh fence at the end of their chicken run, making it bulge, springing them backwards to land with a bump and a squawk. That’s why it was called a chicken run: because the chickens could only run, not fly. 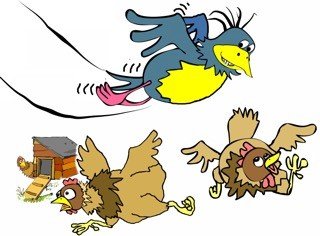 The reason that Bird could no longer fly was because he loved eating – too much. This would not have mattered, but he had eaten too much too many times and had become even larger. He loved the tasty leftover morsels in the fast food cartons that were littered on the sidewalks by untidy people. So Bird grew and grew – and grew. And got heavier and heavier –and heavier. But his wings stayed the same size. So, no matter how fast he flapped, he could not take off from the ground any more. He just couldn’t fly. Bird flapped and flapped his wings furiously, but to no avail, he just scattered the empty food cartons all over the road. And his bottom only rose an inch above the ground before bouncing three times back on the sidewalk.  Bird was flying nowhere and decided to walk down the street and flap at a bus to stop for him with one of his wings.

A sign on the bus said: ‘NO BIRDS – DEFINITELY NO LARGE BIRDS’. Bird could not read signs other than reading the word ‘BIRD’, so thought that it must be a bus especially for Birds and hopped on anyway. Bird did not have any money but the driver liked birds. He kept homing pigeons as pets and thought that Bird must need homing too and felt sorry for him, and turned a blind eye.

Bird perched on a comfy seat hoping no one would notice him. But there were two children: twins Sally and James, sitting right behind Bird who were on their way home from school who did notice him and said together at the same time (as twins sometimes do): ‘Look at that bird!’

Bird didn’t know where he was going. The bus seemed to be going round in circles and stopping and starting all the time. Bird normally flew straight home at night to his favourite perch, on a strong branch, high up in a large tree overlooking a sports field. How he was going to get back up there he did not know. He hoped that the bus would take him there. Sally spoke to Bird: ‘Where are you going?’ Bird was confused and did not know how or what or where to answer. The bus arrived at Sally and James’s bus stop and they beckoned to Bird to hop off too. ‘Let’s take him home’ they both said together (as twins sometimes do).

It was a short walk and hop to Sally and James’ home and they were greeted by their mum. ‘Welcome home darlings, had a nice time?’ she said, and added: ‘What on earth is that?’ and waving a pointed finger.

Definitely . . . NOT! Said their mum in her very most annoyed voice.

Bird guessed that it was best for him to appear his most cuddly, and preened and ruffled his feathers to look like a lovable little yellow fluffy Easter chick. But he was scrawny, shabby and rather ugly. But he did his best.

Luckily Sally and James’ mum felt sorry for Bird and said ‘Oh, alright, but only for one night.’ That evening they all settled down in front of the telly to watch a nature programme about exotic birds living in hot countries far away. Bird’s beak flopped open wide in wonderment. He definitely was not exotic and had never flown to far away countries. Afterwards they found a nice roost for Bird on top of the bannister rails, upstairs on the landing, outside the bedrooms. Bird was very tired and after a few pecks of breakfast cereal and a dip of water, tucked his head under his wing, drifted off to sleep, dreaming of flying again.

The next morning Sally and James said to Bird: ‘Would you like to come to school with us?’ Bird didn’t really know what school was but as it sounded such a nice place, hopped of his perch and followed them.

When they got to school they smuggled Bird inside, putting a school blazer over his wings. The teachers didn’t notice. They went into morning assembly and sat with the rest of their class, who all shouted at the same time: ‘Look at that bird!’

The head teacher came over to Sally and James and Bird and said: ‘We have a large bird in the school, excellent! Do come to the front of the school Bird, we are very pleased to see you.’ And then she spoke to the whole school. ‘We are very lucky today to have a very special visitor. And here he is, a very large bird. And what do we always say to important visitors?

The whole school answered as one ‘Good morning Mr Bird’

Would anyone like to ask him a question?’ Said the head teacher.

The hands shot up.

And the questions followed . . .

‘Where do you live?’

‘Do you have any brothers or sisters?’

Why aren’t you pretty?’

And then something magical happened. Bird could suddenly understand some English words. Up to then he could only understand Bird language and the word bird. He had been taken to school, it was his first day and was learning already.

Although Bird couldn’t speak he made signing actions with his wings and tweets and squawks with his beak to answer the children’s questions as best he could. He enjoyed his first day at school and thought to himself: ‘I’m learning such a lot already. I wonder if the teachers can teach me to fly again?’

‘What an adventure!’ Bird thought to himself.

Please rate this story from 1 to 10 stars. 10 stars means you really liked it!
Rating: 8.04/10. From 492 votes.
Please wait...
- Total nr. of readings: 55,496 Copyright © The author [2020] All Rights Reserved. This story may not be reproduced without the express written permission of the author except for personal use.
Share? Thanks!

The Girl Who Had Wings

A girl has the most beautiful wings. But can she fly?

Grandpa comes to stay from Scotland and nobody is sure how he is going to handle it.

"Mike: The Spotty Beaver" is a fun story about accepting differences in our bodies and the values of friendship.

Littlecar Edward appears to be a disappointment to his father, the big and powerful Firetruck Barney, until one day he is needed for a special job.

A spooky story set in Connemara, Ireland, about a very scary visit to the house of Grandmother's neighbour.

Everyone is mean to the poor little duckling and calls him ugly. Follow his adventure to find out where he really belongs.

12 thoughts on “The Adventures of Bird”