Jack and the Beanstalk

Once upon a time there was a poor widow who lived in a little cottage with her only son Jack.

Jack was a giddy, thoughtless boy, but very kind-hearted and affectionate. There had been a hard winter, and after it the poor woman had suffered from fever. Jack did no work as yet, and they grew dreadfully poor. The widow saw that there was no means of keeping Jack and herself from starvation but by selling her cow; so one morning she said to her son, “I am too weak to go myself, Jack, so you must take the cow to market for me, and sell her.”

Jack liked going to market to sell the cow very much; but as he was on the way, he met a butcher who had some beautiful beans in his hand. Jack stopped to look at them, and the butcher told the boy that they were of great value, and persuaded him to sell the cow for them. And Jack was so silly as to agree to this foolish bargain. 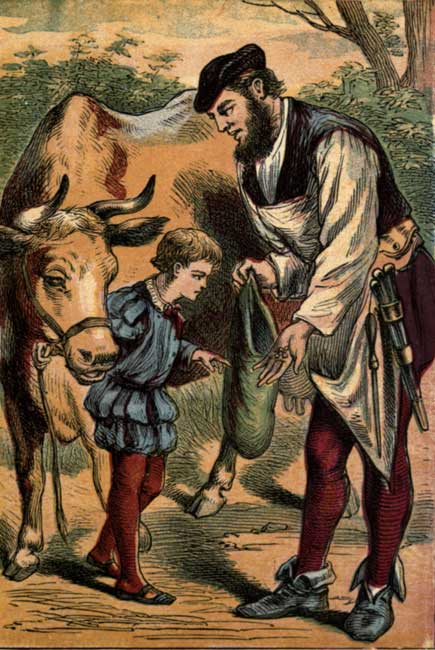 When he brought them home to his mother instead of the money she expected for her nice cow, she was very angry and shed many tears, scolding Jack for his folly. He was very sorry; but, he said, he might as well make the best of it, so he put the seed-beans into the ground close by the side of the steep hill under shelter of which their cottage was built, and went to bed.

The next morning when he got up, he found that the beans had grown, till the bean stalks reached right over the top of the hill, and were lost to his sight. Greatly surprised, he called his mother, and they both gazed in silent wonder at the bean-stalk, which was not only of great height, but was thick enough to bear Jack’s weight.

“I wonder where it goes?” said Jack to his mother; “I think I will climb up and see.”

His mother wished him not to go up this strange ladder, but Jack coaxed her to agree to the attempt, for he was sure there must be something wonderful in the bean-stalk.

Jack instantly began to climb, and went up and up on the ladder-like bean till every thing he had left behind him, the cottage, the village, and even the tall church tower, looked quite little, and still he did not see the top of the bean stalk.

Jack felt a little tired, and thought for a moment that he would go back again; but he was a very persevering boy, and he knew that the way to succeed in anything is not to give up. So after resting for a moment he went on, and at last reached the top of the bean, and found himself in a beautiful country, finely wooded; and not far from the place where he had got off the bean-stalk stood a fine and strong castle.

Jack wondered very much that he had never heard of or seen this castle before; but when he reflected on the subject, he saw that it was as much separated from the village by the perpendicular rock on which it stood as if it were in another land.

While Jack was standing looking at the castle, a very strange-looking woman came out of the wood and advanced towards him.

Jack took off his hat to the old lady, and she said, pointing to the castle, “Boy, that castle belongs to you. A wicked giant killed your father, and took it from your mother; try and win it back from the monster who now has it.” As she ceased speaking she suddenly disappeared, and of course Jack knew she was a fairy.

He was much surprised; however, he walked up to the castle door and knocked, and an old giantess came out. She did not wait till he spoke, but pulled him in at once, for she thought he would make a nice supper for her when her husband was asleep. Just at that moment, however, she heard the giant’s step approaching, so she put Jack into a press, and told him to hide there, or the giant would eat him. As soon as the Ogre came in, he cried in a terrible voice

“Oh!” said his wife, “there is nobody here. You only smell a crow that is flying over the chimney.” Then the giant sat down to dinner, which was quite ready, and when he had eaten a whole sheep, he said, “Bring me my hen.”

The giantess brought a hen, and put it on the table before him, and then she went away.

“Lay,” said the giant to the hen, and she laid a golden egg. Jack could see quite plainly through a little hole which he had bored in the door. Three times the giant said “Lay,” and each time the hen laid a solid gold egg. Then the Ogre, being drowsy, shut his eyes, and soon snored very loudly.

Directly Jack found that the giant was asleep, he stole out of the press, caught up the hen, ran out of the room, opened the door of the castle, which the giant had left slightly open, and climbed down the bean-stalk as fast as he could go.

His mother was glad to see him again, and much surprised at seeing the hen, which laid them three gold eggs every day. Jack’s mother took them to the next town and sold them, and soon grew quite rich. Some time afterwards Jack made another journey up the bean-stalk to the giant’s castle; but first he dyed his hair and disguised himself.

The old woman did not know him again, and dragged him in as she had done before to eat him by-and-by; but once more she heard her husband coming and hid him in the press, not thinking that it was the same boy who had stolen the hen. She put him into the same press, and told him stay quite still there, or the giant would eat him.

Then the giant came in, saying:

“Oh!” said his wife, “it is only the cowherd, who has just been here. We cannot spare him for your dinner.”

Then the giant sat down, and when he had eaten half an ox, he told his wife to bring his money-bags to him. She instantly went and fetched two large bags full of gold; and then left him to go about her usual house-work.

The Ogre counted out the gold twice over, and then put it into the bags and tied them up. In a few minutes Jack heard him snore. He directly crept out of the press, grabbed the bags, and hurrying out of the castle, carried them home quite safely.

Jack’s mother was glad to see him safe at home again, and for a long time she would not let him go up the bean-stalk; but Jack knew he had not yet obeyed the fairy’s command to win back the castle, so after a time he set off once more on this adventure, and tapped again at the castle door.

The giantess, who was very stupid, did not recognise him again, but she stopped a minute before she took him in. She feared another robbery; but Jack’s fresh cheeks looked so tempting that she could not resist him, and so she told him come in.

But at that moment she heard her husband’s step approaching.

Afraid of losing her supper, the Ogress at once shut Jack in the press; and she had hardly hidden him when the giant came in, saying as usual,

“Oh no!” said his wife, “it is only the shepherd, who has been up with a sheep for your dinner.”

The giant sat down, and when he had eaten a whole sheep he said, “I should like some music; bring me my harp.”

The Ogress went and brought a golden harp to him, set it on the table, and went away. Then the Ogre said, “Play,” to the harp, and it played so delightfully that Jack was charmed.

By-and-by, however, the giant snored so loud that he could not hear the music; and Jack quickly stole out, and seizing the harp, ran away with it. But the harp was a fairy belonging to the giant, and as Jack ran, it cried out, “Master! Master!” The giant woke up slowly and rushed after Jack, but the boy was very nimble and outran him. You may imagine how fast Jack went down the bean-stalk this time, hearing all the while the tramp of the giant’s feet behind him.

Just as he reached the bottom he saw the Ogre looking down on him.

The next moment his great feet were on the bean-stalk.

His mother hurried with it, and just as the giant was half way down the bean-stalk, Jack succeeded in chopping it in halves; the lower half fell; the upper half swung away, and the giant, losing his hold, fell heavily to the ground on his head and broke his neck.

The same moment the fairy again stood beside Jack, and touching the broken bean-stalk was turned into a flight of broad, easy steps.

“Go up,” she said, “and take possession of your own home, so long kept from you. The Ogress is dead, and there is no more danger. You have been brave and good. May you be happy.”

Jack thanked the fairy very warmly for her aid, and she again departed to Fairyland, after explaining to Jack that it was her, in the form of that butcher who sold him the beans.

The Bunnies and the Seeds

Three bunnies get one seed each from the wise owl but have very different results. A story about patience.

A little goat's unwillingness to eat grass gets her accused of being lazy.

Raggedy Ann and the Strange Dolls

Two new dolls do not think much of Raggedy Ann when they first see her, but soon learn to realise how special she really is.

Lennie is frightened to be sheared so he decides to run away. But, was it a smart idea to be gone for six years?

A hunt for a lost library book sends Kirsten into a dramatic search and rescue operation -- in her own bedroom.

Grace, Hedgehog and The Troll

A perilous journey into the heart of Tinderbox wood results in a breath-taking rescue mission for Grace and her two trusty companions.

29 thoughts on “Jack and the Beanstalk”