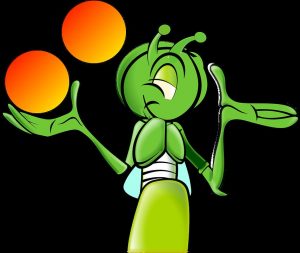 Freddie sat outside on a sunny summer afternoon and watched butterflies dancing around his mother’s flower garden. He had been sick with leukaemia for a long time, but now he was getting better. Today was the first time his mom had allowed him outside. He sat in a chair with a book on his lap. The sun felt warm on his face, yet Freddie felt sad.

Everyone had friends to play with except Freddie. He couldn’t wait to get better. I guess my old friends think sick kids are no fun..

At that moment he felt a tickle near his ear. He thought it was a fly, so he brushed at his ear.

Freddie quickly turned his head and looked around the lawn, “Who said that?”

“But I don’t see anyone,” said Freddie.

“That’s because I’m small,” said the voice. “Look on your shoulder.”

Freddie turned and looked and on his shoulder there sat a cricket. He reached over and took the cricket off. his shoulder and held it in the palm of his hand The cricket was dressed in a brown hat, green shirt and black pants.

“ Wow! You can talk?” said Freddie as he held the cricket.

“My name’s Freddie. He stared at Clarence. “Crickets aren’t supposed to talk and they never wear clothes,” said Freddie.

“How so?” asked Freddie.

“I’m here to be your friend until you get better,” said Clarence smiling.

“Wow,” said Freddie. “You mean you’ll  play games and stuff with me.”

“Absolutely,” answered the cricket. “Now let’s get started. What do you want to do first?”

They played checkers and then they played over and over again. “Now let’s play I Spy,” said Freddie. Clarence Cricket was very good at guessing. He was much better at it than Freddie and proved to be a great player. In the coming days, Clarence played Star Wars, Connect 4, Boggle, and many other games with Freddie.

As the summer days continued, Freddie grew stronger and healthier.

He and Clarence went for longer and longer walks together. They practiced skimming stones on the surface of the pond. Freddie began to feel the energy flow through him. He was happy once again.

You sure are getting stronger,” said his mom.

“Yes. He’s in my room and he stays in a jar,” answered Freddie. “He plays games with me every day. We have lots of fun together,” he said.

His mom and dad looked at each other and shook their heads. “That boy has SOME imagination,” said his dad.

Toward the end of the summer, Freddie felt much better. His mother said, “ Freddy, your doctor said you are doing fantastic. It’s time for you to see some children your own age.”

“I don’t need to,” said Freddie, “because I have Clarence.”

The next morning Clarence said to Freddie “I have something to tell you and I don’t want you to be sad. Freddie, it’s time for me to go. You don’t need me anymore.”

“Yes, I AM, your friend. Yet, it’s time for me to help other children. You’ll be fine without me.” And with a wave, he flew away.

Freddie felt sad without Clarence and he didn‘t want to do much. In the afternoon he saw that a new family had moved into the empty house next door to him. A boy who was just about his age stood on the lawn.

Freddie ran over and introduced himself. “Hi, I’m Freddie.”

“How do you know?” asked Freddie.

“The cricket told me!” he said and then he winked.

Please rate this story from 1 to 10 stars. 10 stars means you really liked it!
Rating: 8.97/10. From 117 votes.
Please wait...
- Total nr. of readings: 4,592 Copyright © The author [2020] All Rights Reserved. This story may not be reproduced without the express written permission of the author except for personal use.
Share? Thanks!

If Daisy told the truth about Carmie rummaging through their teacher’s desk, why is Daisy the one in trouble?

When elementary school-aged students express their boredom with their grammar lesson, their teacher finds a creative way to re-focus their attention.

Rima tells a village girl, Bindra, of the right to education for all children.