Cinderella’s mother died while she was a very little child, leaving her to the care of her father and her step-sisters, who were very much older than herself; for Cinderella’s father had been twice married, and her mother was his second wife. Now, Cinderella’s sisters did not love her, and were very unkind to her. As she grew older they made her work as a servant, and even sift the cinders; on which account they used to call her in mockery “Cinderella.” It was not her real name, but she became afterwards so well known by it that her proper one has been forgotten.

She was a very sweet-tempered, good girl, however, and everybody (except her cruel sisters) loved her. 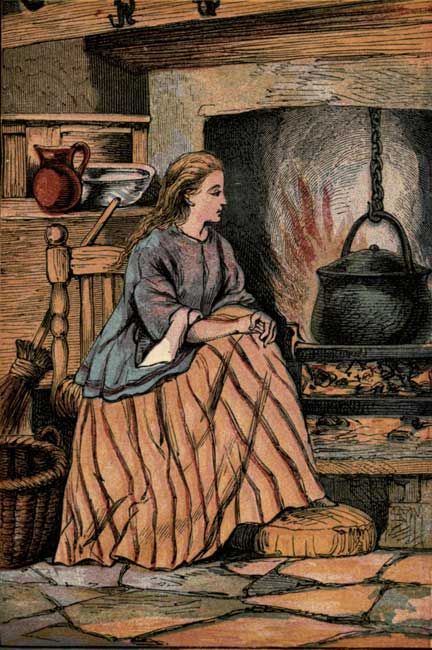 It happened, when Cinderella was about seventeen years old, that the King of that country gave a ball, to which all ladies of the land, and among the rest the young girl’s sisters, were invited. And they made her dress them for the ball, but never thought of allowing her to go there. 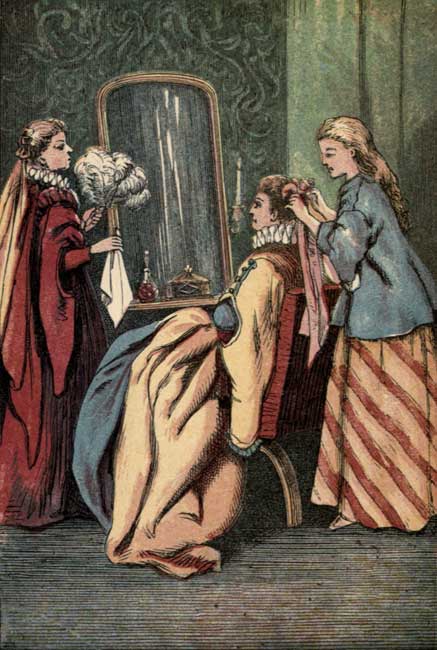 “I wish you would take me to the ball with you,” said Cinderella, meekly.

“Take you, indeed!” answered the elder sister, with a sneer; “it is no place for a cinder-sifter: stay at home and do your work.”

When they were gone, Cinderella, whose heart was very sad, sat down and cried bitterly; but as she sat sorrowful, thinking of the unkindness of her sisters, a voice called to her from the garden, and she went out to see who was there. It was her godmother, a good old Fairy.

“Do not cry, Cinderella,” she said; “you also shall go to the ball, because you are a kind, good girl. Bring me a large pumpkin.”

Cinderella obeyed, and the Fairy, touching it with her wand, turned it into a grand coach. Then she desired Cinderella to go to the trap, and bring her a rat. The girl obeyed, and a touch of the Fairy’s wand turned him into a very smart coachman. Two mice were turned into footmen; four grasshoppers into white horses. Next, the Fairy touched Cinderella’s rags, and they became rich satin robes, trimmed with point lace. Diamonds shone in her hair and on her neck and arms, and her kind godmother thought she had seldom seen so lovely a girl. Her old shoes became a charming pair of glass slippers, which shone like diamonds.

“Now go to the ball, my love,” she said, “and enjoy yourself. But remember, you must leave the room before the clock strikes eleven. If you do not your dress will return to its original rags. I approve of pleasure, but not of dissipation, and I expect that you will show your gratitude by obeying me.”

Cinderella kissed and thanked her godmother. Then she stepped into her coach and drove off, with her footmen behind, in great style. The Fairy, when she was gone, returned to Fairyland.

Cinderella was received at the King’s palace with great respect. The Lord Chamberlain bowed low to her, thinking she must be a very great lady by her dress and carriage, and he showed her at once into the ball-room. 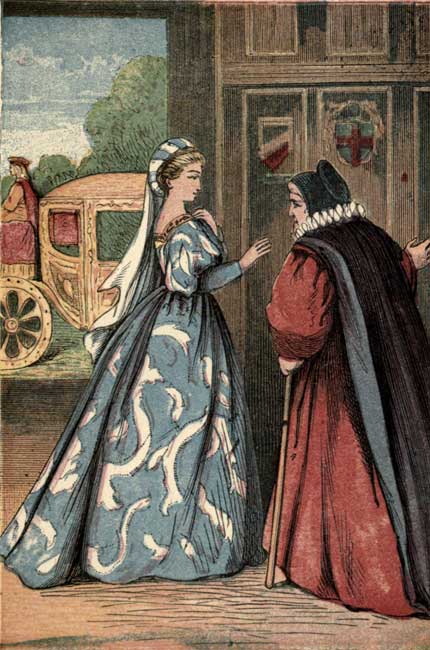 She was so beautiful that everybody looked at her, and wondered who she was; and the Prince asked her to dance with him, and afterwards would dance with no one else. 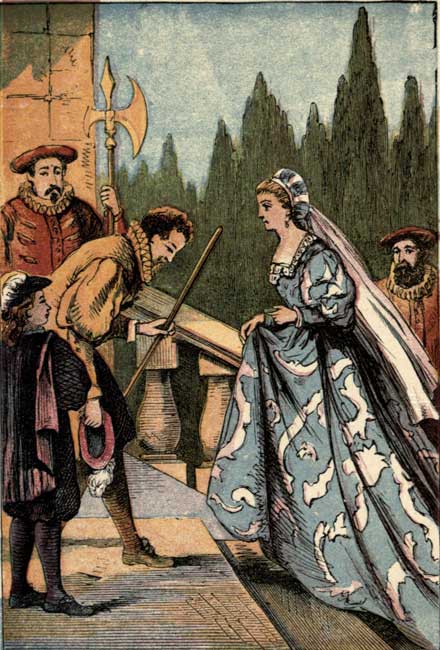 But she made haste to leave a little before the hour fixed, and had time to undress before her sisters came home. They told her a beautiful Princess had been at the ball, with whom the Prince was delighted. They did not know it was Cinderella herself, and she was amused to hear them admire her grace and beauty, and say that they were sure she was a royal lady.

The Prince was quite vexed when supper-time came, and he could not find his beautiful partner, and no one had seen her leave the room. But in hopes of beholding her again, he persuaded the King to give another grand ball. As soon as her sisters were gone to it, Cinderella’s godmother arrived.

“You were so good and obedient last time, that I shall let you go out again,” said she to the young girl.

And once more the rat, mice, grasshoppers, and pumpkin (which had gone back to their original shapes after the first ball) were turned into the grand carriage and attendants, and Cinderella, in rose-coloured satin and rubies, went to the royal ball.

Directly the Prince saw her, he asked her to dance, and would have no other partner, and as he led her past her two unkind sisters, she saw them look at her dress with envious eyes, and knew that they wished they were as beautiful, and as well-dressed as she was.

But in the midst of her enjoyment, Cinderella remembered the Fairy’s command, and at half-past ten glided out of the room, and drove home again. Her sisters found her waiting to undress them in her usual rags, and kept her up to tell her how beautiful the unknown Princess was, and how well she was dressed.

Again the Prince was vexed at the sudden disappearance of the beautiful stranger, and once more he persuaded the King to give a grand State ball.

“I wonder if Princess Beauty will be there!” said the sisters to Cinderella. “We must have new dresses, for she is so splendid. She makes every one look shabby.” 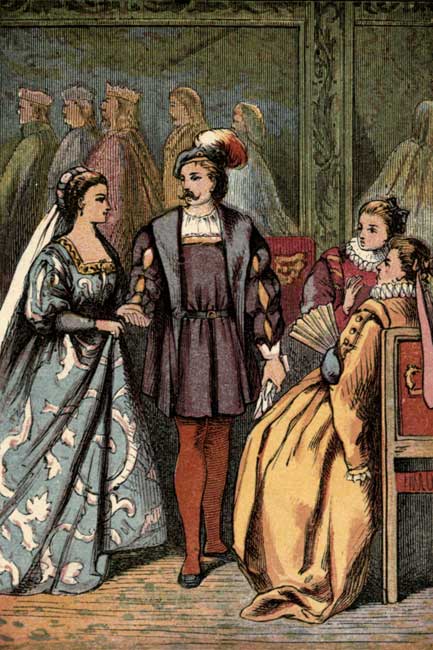 Cinderella smiled as she helped them to dress. She was sure the Fairy would let her go to the ball too. And she was right. Her godmother, pleased with her obedience, came in good time, and Cinderella, dressed in blue satin and pearls, went in the same style as before. 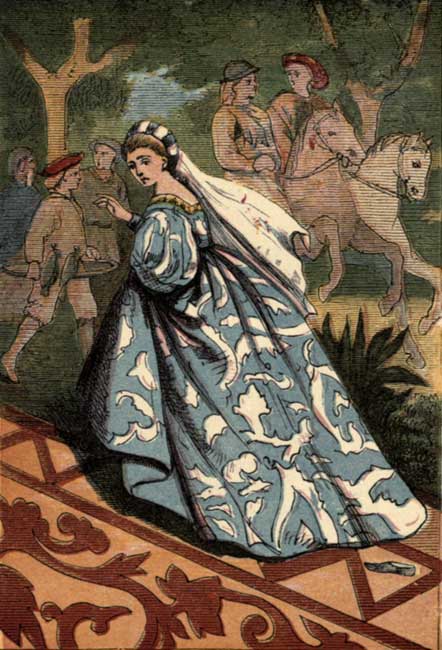 The Prince would scarcely let her out of his sight, and Cinderella, who was getting a little spoiled by all the flattery she heard, began to think more of herself and less of the Fairy; so the time stole on, till glancing up at the clock, she saw it wanted only five minutes to eleven.

At once she darted out of the room, and ran through the palace as fast as she could go, but as she reached the hall, she lost one of her precious glass slippers! She did not stop to pick it up, but rushed to the door. Alas! the clock had struck
Eleven. She found no coach, only a pumpkin, and the rat and mice ran quickly away when they saw her; while all her fine dress turned to rags, and she had to run home alone in the darkness of the night.

The Prince was very much surprised when he missed Cinderella again, and leaving the ball, went in search of her. He asked all the attendants, but no one had seen her, and when enquiry was made of the porter, he said that no one had gone out of the palace except a poor ragged beggar-girl.

However, the Prince’s search was rewarded by his finding the glass slipper, which he well knew belonged to the unknown Princess. He loved Cinderella so much that he now resolved to marry her; and as he felt sure that no one else could wear such a tiny shoe as hers was, he sent out a herald to proclaim that whichever lady in his kingdom could put on this glass slipper should be his wife.

All the great ladies who wished to be a Princess tried to put it on, but in vain. Cinderella’s sisters tried, but could not get it on, and then Cinderella asked if she might try. They laughed at her; but the Prince, hearing of her wish, sent for her. She went with her sisters in her poor dress, but very clean, and at once put on the slipper. Then she drew the fellow of it from her pocket, and slipped it on her other foot.

The Prince, who had thought the moment he saw her that the poor girl was very much like the beautiful Princess, was delighted. He insisted on Cinderella telling him her story, which she did very modestly, and all listened with wonder. 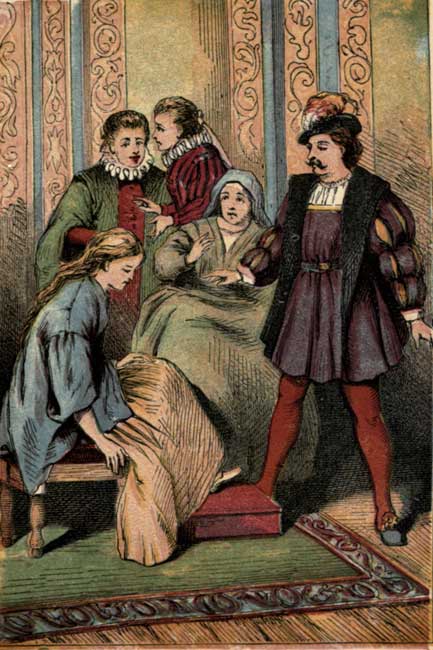 As her tale ended, the Fairy godmother suddenly entered the room, and placing her godchild’s hand in the Prince’s, said:

“Take this young girl for your wife, Prince; she is good and patient, and as she has known how to submit to injustice meekly, she will know how to reign justly.” 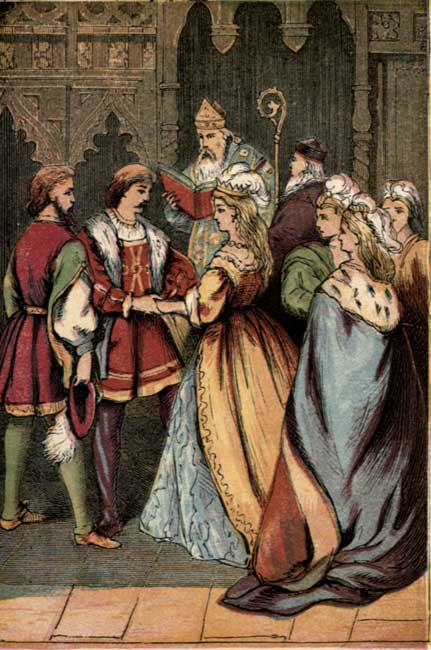 So Cinderella was married to the Prince in great state, and they lived together very happily. She forgave her sisters, and treated them always very kindly, and the Prince had great cause to be glad that he had found the glass slipper.

Please rate this story from 1 to 10 stars. 10 stars means you really liked it!
Rating: 7.80/10. From 3032 votes.
Please wait...
- Total nr. of readings: 641,677 Copyright © The author [2020] All Rights Reserved. This story may not be reproduced without the express written permission of the author except for personal use.
Share? Thanks!

The story, adapted from Greek mythology, about Pandora and her box that she wasn't supposed to open.

The local toy hospital has been turned upset down with a large number of toy accidents.

Stirfry is a fat and lazy cat. What will happen when he can't fit through the cat flap any more and another cat tries to take his place?

Freddie can't get to sleep and tries to think up a story but has a fantasy adventure instead.

A stray tabby meets an old Quaker cat at Oak Grove Senior Living and learns their job is to help care for the residents.