Once upon a time there lived a king and queen who had no children; and this made them very unhappy. But one day, as the queen was walking by the side of the river, a little fish lifted its head out of the water, and said, “Your wish shall come true, and you shall soon have a daughter.”

What the little fish had foretold soon came to pass; and the queen had a little girl who was so very beautiful that the king could not stop looking on her for joy, and determined to hold a great feast. So he invited not only his relations, friends, and neighbors, but also all the fairies, that they might be kind and good to his little daughter. Now there were thirteen fairies in his kingdom, and he had only twelve golden dishes for them to eat out of, so that he was obliged to leave one of the fairies without an invitation. The rest came, and after the feast was over they gave all their best gifts to the little princess; one gave her virtue, another beauty, another riches, and so on till she had all that was excellent in the world.

When eleven had done blessing her, the thirteenth, who had not been invited, and was very angry on that account, came in, and determined to take her revenge. So she cried out, “The king’s daughter shall in her fifteenth year be wounded by a spindle, and fall down dead.” Then the twelfth, who had not yet given her gift, came forward and said that the bad wish must be fulfilled, but that she could soften it, and that the king’s daughter should not die, but fall asleep for a hundred years.

But the king hoped to save his dear child from the threatened evil, and ordered that all the spindles in the kingdom should be bought up and destroyed. All the fairies’ gifts were in the meantime fulfilled; for the princess was so beautiful, and well-behaved and amiable, and wise, that every one who knew her loved her.

Now it happened that on the very day she was fifteen years old the king and queen were not at home, and she was left alone in the palace. So she roamed about by herself, and looked at all the rooms and chambers, till at last she came to an old tower, to which there was a narrow staircase ending with a little door. In the door there was a golden key, and when she turned it the door sprang open, and there sat an old lady spinning away very busily.

“Why, how now, good mother,” said the princess, “what are you doing there?”

“Spinning,” said the old lady, and nodded her head. “How prettily that little thing turns round!” said the princess, and took the spindle and began to spin. But scarcely had she touched it before the prophecy was fulfilled, and she fell down lifeless on the ground.

However, she was not dead, but had only fallen into a deep sleep; and the king and the queen, who just then came home, and all their court, fell asleep too, and the horses slept in the stables, and the dogs in the yard, and the pigeons on the house-top, and the flies on the walls. Even the fire on the I hearth left off blazing, and went to sleep; and the meat that was roasting stood still; and the cook, who was at that moment pulling the kitchen-boy by the hair to give him a box on the ear for something he had done amiss, let him go, and both fell asleep; and so everything stood still, and slept soundly.

A high hedge of thorns soon grew around the palace, and every year it became higher and thicker, till at last the whole palace was surrounded and hidden, so that not even the roof or the chimneys could be seen.

But there went a report through all the land of the beautiful sleeping Briar Rose, for thus was the king’s daughter called; so that from time to time several kings’ sons came, and tried to break through the thicket into the palace.

This they could never do; for the thorns and bushes were too thick.

After many, many years there came another king’s son into that land, and an old man told him the story of the thicket of thorns, and how a beautiful palace stood behind it, in which was a wondrous princess, called Briar Rose, asleep with all her court. He told, too, how he had heard from his grandfather that many, many princes had come, and had tried to break through the thicket, but had all failed. 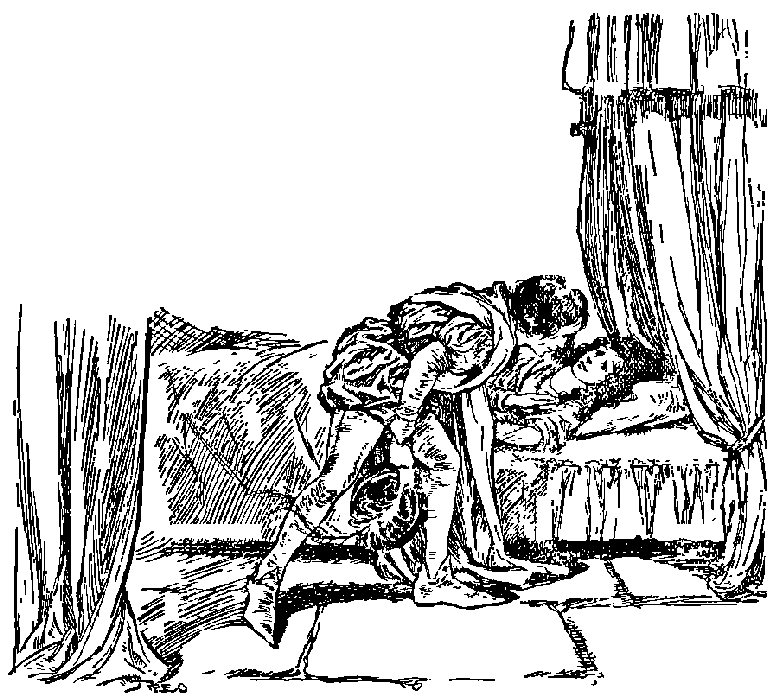 Then the young prince said, “All this shall not frighten me; I will go and see Briar Rose.” The old man tried to dissuade him, but he persisted in going.

Now that very day the hundred years were completed; and as the prince came to the thicket he saw nothing but beautiful flowering shrubs, through which he passed with ease, and they closed after him as firm as ever.

Then he came at last to the palace, and there in the yard lay the dogs asleep, and the horses in the stables, and on the roof sat the pigeons fast asleep with their heads under their wings; and when he came into the palace, the flies slept on the walls, and the cook in the kitchen was still holding up her hand as if she would beat the boy, and the maid sat with a black fowl in her hand ready to be plucked.

Then he went on still further, and all was so still that he could hear every breath he drew; till at last he came to the old tower and opened the door of the little room in which Briar Rose was, and there she lay fast asleep, and looked so beautiful that he could not take his eyes off, and he stooped down and gave her a kiss. But the moment he kissed her she opened her eyes and awoke, and smiled upon him.

Then they went out together, and presently the king and queen also awoke, and all the court, and they gazed on each other with great wonder.

And the horses got up and shook themselves, and the dogs jumped about and barked; the pigeons took their heads from under their wings, and looked about and flew into the fields; the flies on the walls buzzed away; the fire in the kitchen blazed up and cooked the dinner, and the roast meat turned round again; the cook gave the boy the box on his ear so that he cried out, and the maid went on plucking the fowl.

And then was the wedding of the prince and Briar Rose celebrated, and they lived happily together all their lives.

Please rate this story from 1 to 10 stars. 10 stars means you really liked it!
Rating: 7.75/10. From 85 votes.
Please wait...
- Total nr. of readings: 6,111 Copyright © The author [2020] All Rights Reserved. This story may not be reproduced without the express written permission of the author except for personal use.
Share? Thanks!

Easter Billy is a hilarious story about a dog who suffers from hayfever and has to juggle between Easter eggs and sneezes, as he tries to organise an egg hunt for his puppies, in order to bond with them.

Cake please, make it quick! Demand a cake inscribed with your initial on it.

Classic nursery rhyme, must be used in conjunction with wiggling toes and tickling.

Penguin and the Fig Tree

The true story of mysteriously missing figs and Dulce's uncle's dog who went by the name of Penguin!

Dreams of a Christmas Tree

A tree dreams of great fame at Christmas.