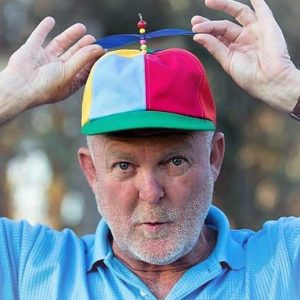 Steve Heron OAM has a passion to power hope in children especially through children’s literature. His love of picture books is shown by his extensive collection. He craves to write quality picture books and novels that engage children, at the same time aid with handling things life can throw at them. He aspires to keep it real and unreal for kids in his books. Steve is the founder of Nurture Works Foundation and developed the acclaimed ‘BUZ – Build Up Zone’ social and emotional programs and initiatives used in many schools throughout WA. In 2016, he was listed in the Queen’s Birthday honours and received an Order of Australia Medal for contribution to the social and emotional wellbeing of children. In 2015 Steve completed a Diploma of Children’s Writing and Publishing with the Australian College. Steve recently retired from 40 years of pastoral work with children to focus on his writing. Maximus is his first middle-grade novel published by Serenity Press early 2018. Currently searching for publishers to pick up his twenty-one picture books he has written. (One under contract) Steve has extensive experience with working in schools and is no stranger to doing presentations to kids. He has a positive web and social media platform ready to promote his books. He has been called an affirmative vandal and a hooligan of hope. You can find out more about Steve at www.steveheron.com

The Might brothers, Orswille and Willboar embark on a mission to be the first pigs to fly. With little help and a lot of hindrance from the other farmyard animals they create the ultimate flying contraption.

In the days of old it wasn’t a knight who was bold, but a dragon in a shiny hat. This humorous story has bits that are gory and twisted chivalry is where it’s at.

What will Amish and Suhas do with a small money pouch they find on their way home from the makeshift football field?