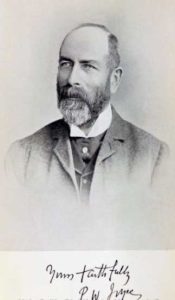 Patrick Weston Joyce (1827 – 7th January 1914) was an Irish historian, writer and music collector, known particularly for his research in local place names of Ireland. He was born in Ballyorgan in the Ballyhoura Mountains, on the borders of counties Limerick and Cork in Ireland, and grew up in nearby Glenosheen. Joyce was a native Irish speaker who started his education at a hedge school. He then attended school in Mitchelstown, County Cork. Joyce started work in 1845 with the Commission of National Education. He became a teacher and principal of the Model School, Clonmel. In 1856 he was one of fifteen teachers selected to re-organize the national school system in Ireland. He was principal of the Training College, Marlborough Street, in Dublin from 1874 to 1893. As a member of the Society for the Preservation of the Irish Language he wrote an Irish Grammar in 1878. He was President of the Royal Society of Antiquaries of Ireland from 1906 to 1908, an association of which he was a member from 1865. Joyce was a key cultural figure of his time. His wide interests included the Irish language, Hiberno-English, music, education, Irish literature and folklore, Irish history and antiquities, place-names and much else. He produced many works on the history and culture of Ireland. His most enduring work is the pioneering The Origin and History of Irish Names of Places (first edition published in 1869).