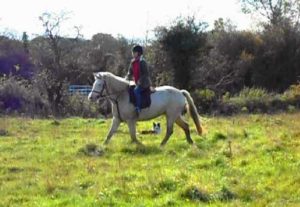 Originating from County Limerick in Ireland, Lorraine O’Byrne has been writing children’s stories since she was a child. Following an arts degree in the University of Limerick she went on to complete a diploma earning herself a distinction in Freelance Journalism. Several of her articles are published on the Internet magazine http://www.suite101.com Having a passion for writing, Lorraine decided to do a creative writing course with ‘The Killaloe Hedge School of Writing’, from there she published her first children’s book “The Hippity Dippity Witch.” Aimed at the seven to nine age group, “The Hippity Dippity Witch” captures the wondrous imagination of young children. Embraced by its vivid imagery and endearing characters, readers will find themselves swept along with this magical adventure. Summary: What terrible thing has happened to Willow Grove? Once a beautiful haven, now a scene of total devastation. The creatures of the forest cower in terror, but from what? There is a cruel magic at hand here. It is up to Jenny and her friends to solve the mystery before it is too late! Lorraine has since then published several short children’s stories some of which are: “Watch out Bobby,” and “The Intruder.” “Watch out Bobby,” is for four to eight year olds. This is a heart warming tale about a little puppy that’s lost his only friend and must learn to get on with the other animals on a new farm if he is to survive. Summary: Bobby a six month border collie pup must leave home and his best friend to begin a new life on a farm. He doesn’t get on with the other animals. Henrietta the cat is mean and Duggie duck keeps making fun of him. Will Bobby ever make friends again? “The Intruder,” also for the four to eight age group is about a kitten, a dog and a jealous cat. Summary: Felicity cat loves her comfort. She gets three delicious meals everyday, a roof over her head and loving attention from Molly her owner. Everything is terrific until suddenly, one day, her life is turned upside down. A pesky intruder invades the farm. Felicity must take control of the situation fast or nothing will ever be the same again! These stories can be purchased as E books on Amazon Kindle. Lorraine lives on a farm with her husband Donal. A lot of her inspiration for kids’ stories comes from her own animals, Walt Disney and specifically her childhood. Lorraine is currently working on a children’s novel. Check out her blog http://www.lorraineobyrne.wordpress.com

A heartwarming tale about a young robin’s courage and determination that all young readers will really enjoy.