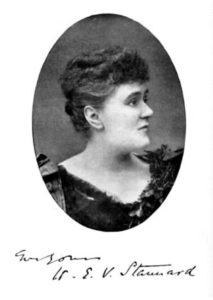 Henrietta Eliza Vaughan Stannard (1856-1911) writing under the pseudonym of John Strange Winter, was a British novelist. In 1881, appeared Cavalry Life, a collection of regimental sketches, and in 1883 Regimental Legends. Both bore the name of ‘John Strange Winter,’ a character that appears in the first publication. The publisher refused to bring out the books under a female name. The public assumed the author to be a cavalry officer. In 1885, Booties’ Baby: a story of the Scarlet Lancers, the tale that assured her popularity, appeared in the Graphic. Two million copies were sold within ten years of its first publication. Tales of a similar character, with military life for their setting, followed in rapid succession until her death.

When Bertie finds out that his friend Tom will be alone for Christmas, he invites him home. But when Bertie’s own plans get disrupted, he learns that a kindness is never wasted.