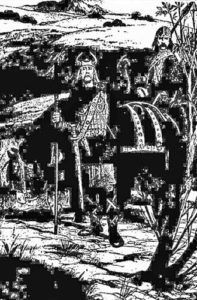 Sir George Webbe Dasent (1817–1896) was a translator of folk tales and contributor to The Times. Dasent was born 22 May 1817 at St. Vincent, West Indies, the son of the attorney general, John Roche Dasent. He was educated at Westminster School, King’s College London, and Oxford University, where he was a contemporary of J.T. Delane, whose friend he had become at King’s College. On leaving the university in 1840 he was appointed to a diplomatic post in Stockholm, Sweden. There he met Jakob Grimm, at whose recommendation he first became interested in Scandinavian literature and mythology. In 1842 he published the first result of his studies, an English translation of The Prose or Younger Edda. In the following year he translated Rask’s Grammar of the Icelandic or Old-Norse Tongue, taken from the Danish. Returning to England in 1845 he became assistant editor of The Times under Delane, whose sister he married; but he still continued his Scandinavian studies, publishing translations of various Norse stories. In 1853 he was appointed professor of English literature and modern history at King’s College London and in 1859 he translated Popular Tales from the Norse (Norske Folkeeventyr) by Peter Christen Asbjørnsen and Jørgen Moe, including in it an “Introductory Essay on the Origin and Diffusion of Popular Tales.” Perhaps his most well-known work, The Story of Burnt Njal, a translation of the Icelandic Njal’s Saga that he had first attempted while in Stockholm, was issued in 1861. This was followed in 1861-1862 with a visit to Iceland, where he was hailed in Reykjavík as one of the saga lovers who had strengthened ties between the English and Norse. Subsequent to that visit, he published in 1866 his translation of Gisli the Outlaw from the Icelandic. Another well-known work is East O’ the Sun and West O’ the Moon, a collection of Norwegian fairy stories (including the tale of that name), charmingly translated from Norwegian Folktales by Peter Christen Asbjørnsen and Jørgen Moe. In 1876 he was knighted in England, though he was already a Danish knight.

A witch tries to take a boy off for cooking in her pot, but he keeps finding a way to escape. This one is not for the very young.

The Husband who was to Mind the House

A man thinks his wife doesn’t do anything right, so agrees readily when she suggests swapping places for a day. He soon realises that the work she does is not as simple as it first appears.

Boots and his Brothers

The King announces that anyone who can chop down the oak tree and dig a well for him can marry the princess and have half the kingdom. Boots and his two brothers go off to try their luck, but Boots keeps wandering off to investigate things along the way.