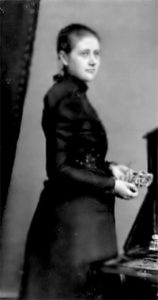 Beatrix Potter (born Helen Beatrix Potter; 28 July 1866 – 22 December 1943) was an English author, illustrator, natural scientist and conservationist best known for her imaginative children’s books, featuring animals such as those in The Tale of Peter Rabbit, which celebrated the British landscape and country life. She grew up with few friends outside her large extended family. Her parents were artistic, interested in nature and enjoyed the countryside. As children, Beatrix and her brother Bertram had numerous small animals as pets which they observed closely and drew endlessly. Summer holidays were spent away from London, in Scotland and in the English Lake District where Beatrix developed a love of the natural world which was the subject of her painting from an early age. Following some success illustrating cards and booklets, Potter wrote and illustrated The Tale of Peter Rabbit, publishing it first privately in 1901, and a year later as a small, three-colour illustrated book with Frederick Warne & Co. She became unofficially engaged to her editor Norman Warne in 1905 despite the disapproval of her parents, but he died suddenly a month later of leukemia. With the proceeds from the books and a legacy from an aunt, Potter bought Hill Top Farm in Near Sawrey, a tiny village in the English Lake District near Windermere, in 1905. Over the following decades, she purchased additional farms to preserve the unique hill country landscape. Potter published over 23 books: the best known are those written between 1902 and 1922. She died of pneumonia/heart disease on 22 December 1943 at her home in Near Sawrey at age 77, leaving almost all her property to the National Trust. She is credited with preserving much of the land that now comprises the Lake District National Park.

The Tale of Tom Kitten

Tabitha Twitchit gets annoyed after she washes and dresses her three kittens for a party, but within moments they have dirtied and lost their clothes!

The Tale of Timmy Tiptoes

Timmy Tiptoes is a squirrel believed to be a nut-thief and is imprisoned in a hollow tree.

The Tale of the Pie and the Patty-Pan

Ribby the cat holds a tea party for a dog called Duchess. Complications arise when Duchess tries to replace Ribby’s mouse pie with a pie of her own.

Story about an impertinent red squirrel named Nutkin and his narrow escape from an owl called Old Brown.

The Tale of Samuel Whiskers

This story tells of Tom Kitten’s escape from two rats who plan to make him into a pudding!

Can Mrs. Tittlemouse keep her house tidy in the face of different intruders who keep making a mess?

The Tale of Mrs. Tiggy-winkle

Mrs. Tiggy-winkle is a hedgehog washerwoman who lives in a tiny cottage. A child named Lucie happens upon the cottage and stays for tea.

The Tale of Mr. Tod

The badger Tommy Brock kidnaps the children of Benjamin Bunny and his wife Flopsy and hides them in an oven in the home of his arch-enemy, a fox called Mr. Tod.

The Tale of Johnny Town-Mouse

The tale of a country mouse and a city mouse who visit one another in turn. Which will they prefer as a place to live?

Flopsy Bunnies, while raiding a rubbish heap of rotting vegetables, fall asleep and are captured by Mr. McGregor who places them in a sack.

The Tale of Benjamin Bunny

The story of Peter Rabbit’s return to Mr. McGregor’s garden with his cousin Benjamin, where they get trapped by a cat while trying to retrieve the clothes he lost there during his previous adventure.

The Tailor of Gloucester